Have you ever pondered on the origins of the domestic chicken? I thought not.  Read on..

Chickens seem have been domesticated by around 7,500 years ago, most probably from the wild Red Junglefowl, Gallus gallus.  We saw this one in Kaziranga: just look at him: 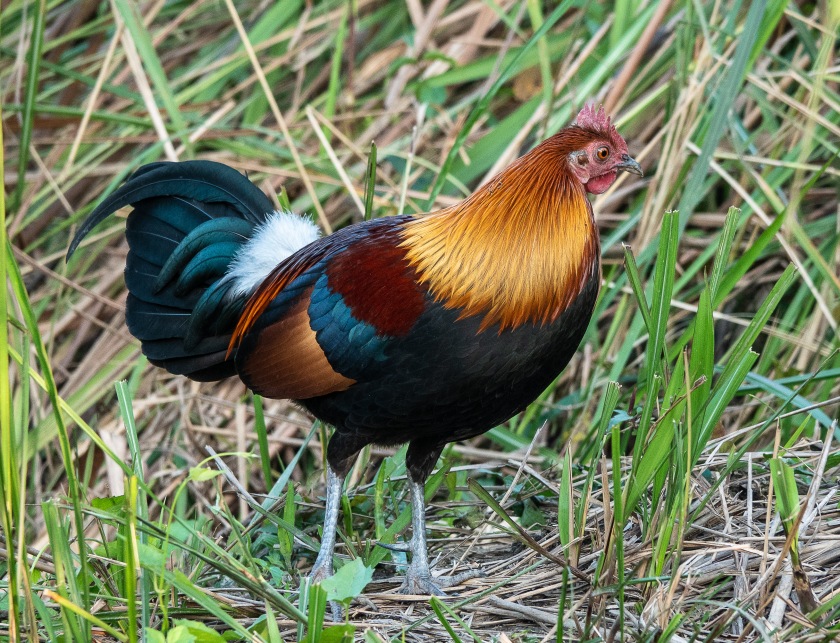 In close-up he is draped in blazing orange feathered locks, just like Lizzie Siddall*: 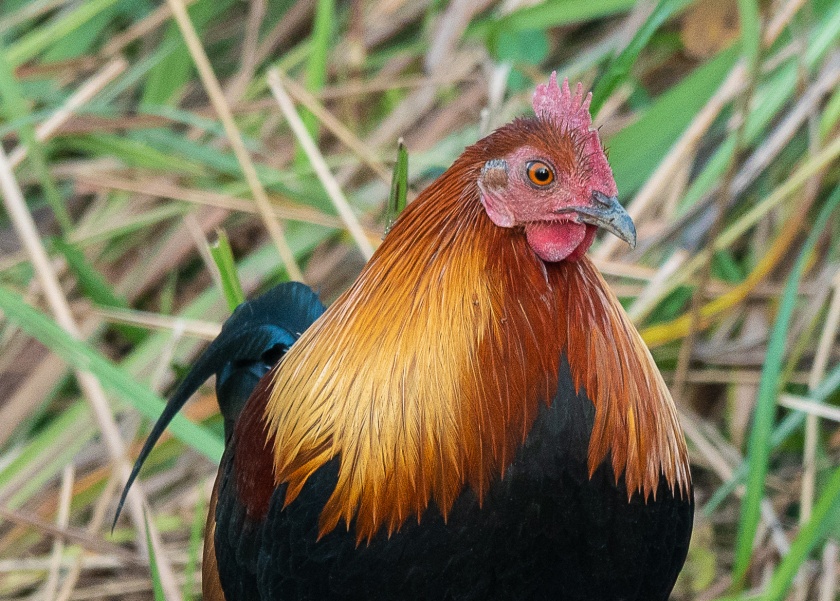 There is some fear that truly wild Red Junglefowl are becoming rare because of contamination of the gene pool by domestic chickens. Let’s hope not.

*Lizzie Siddall was a pre-Raphaelite artist, and also the wife, muse and model for her husband Dante Gabriel Rossetti. She was famous for her red hair: 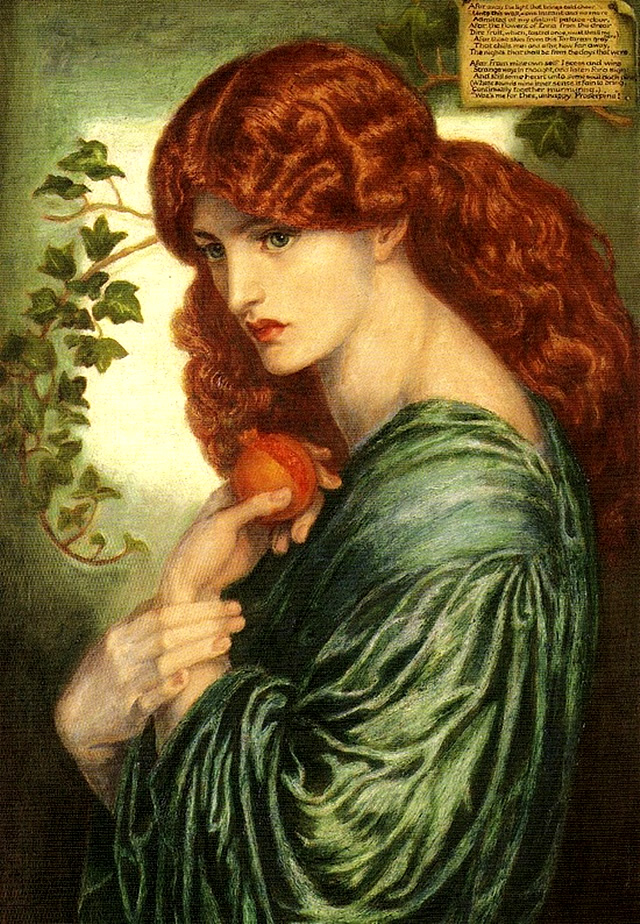 Or if you prefer you could imagine The Red Woman, Melisandre, from Game of Thrones, played by Carice van Houten!

[Something warm and cuddly hanging from a tree, as Christmas approaches!]

Of all the apes, gibbons are the hardest to see but the easiest to hear: listen to this troop calling, and imagine hearing it deep in the forest:

Seeing them is another matter.

We were at the Hoolock Gibbon Sanctuary two hours east of Kaziranga, which has a stable and even  increasing population of White-browed Gibbons, more properly known as Western Hoolock Gibbons, Bunopithecus hoolock.

They move around high in the canopy, brachiating*: 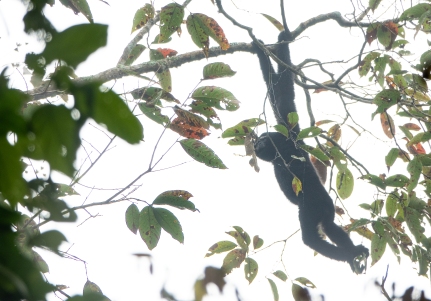 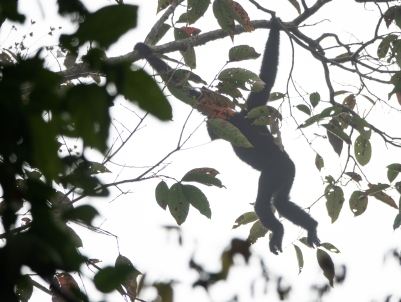 But getting a clear view let alone a close-up is hard. This is either a male or a juvenile: both are black with dramatic white eyebrows, just visible in this photo, most of which is a picture of his/her bottom.

But every now and then you get lucky: look at the astonishing length of those arms.

Their arms are almost twice as long as their legs, and when they descend to the ground (rarely) they have to hold their arms above their heads. On the ground, they are about a meter tall, the height of a small child.

The mature females are naturally blonde (so teenage gibbon girls don’t need peroxide) , and note the bulging biceps that come from doing chin-ups all day long:

Here is a closeup of the female and baby:

Hoolock gibbons are thought to mate for life, and a family group has an adult pair and 1-4 juveniles of varying ages. They are considered endangered, numbering around 100,000 globally, and 90% of those are in Myanmar. Their population has fallen by about 50% over the last 40 years (three generations), largely due to habitat loss, and this decline is forecast to continue.

*Brachiating is using only your arms to move around, like a gymnast on the horizontal bar.

PS: Apes, unlike monkeys, have no tails. Gibbons are Lesser Apes, as opposed to the chimps, bonobos, orangutans, gorillas, and humans, all of which are Great Apes, aka Hominids.

Grey-headed Swamphens Porphyrio poliocephalus are a species of Purple Swamphen found from the Middle East through Nepal and India to Northern Thailand. In the 1990’s some got loose in southern Florida, where they are now established. They are a sort of rail, and wade around in marshes and shallow ponds. Their bill is bright red, very large, with a shield on top that covers part of the head.

These ones must I think have been nesting, because a cormorant came near (right foreground), and they attacked it fiercely:

One of the swamphens kicked and pecked it: 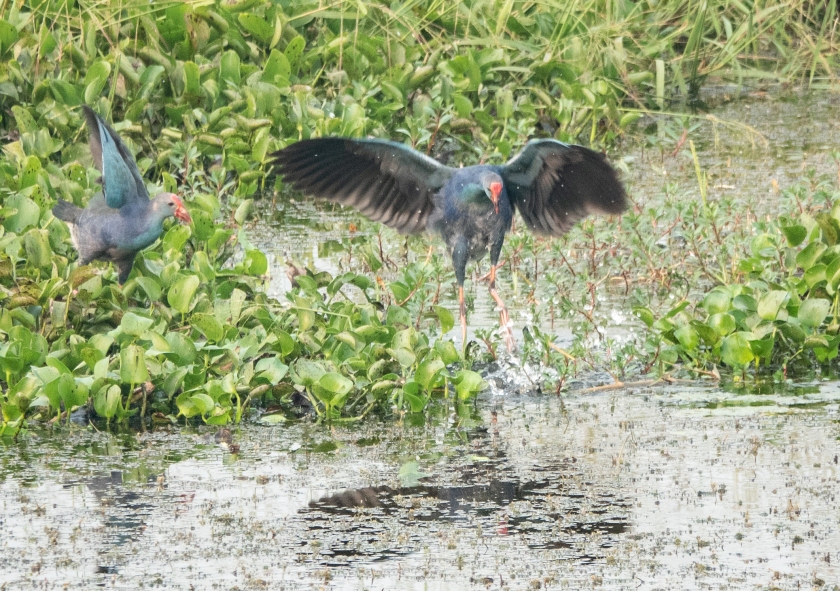 And eventually they fully submerged it, or perhaps it dived and fled:

My two travel companions are birders, so one morning at around 6.30am I found myself standing in Chitwan, in the wet reeds, in the mist, trying and failing to see various very small birds. So I wandered around looking for other interesting things. First, the aptly named Toothpick Grasshopper (our guide’s name for it; I think it is a member of Atractomorpha, which means ‘arrowhead’): 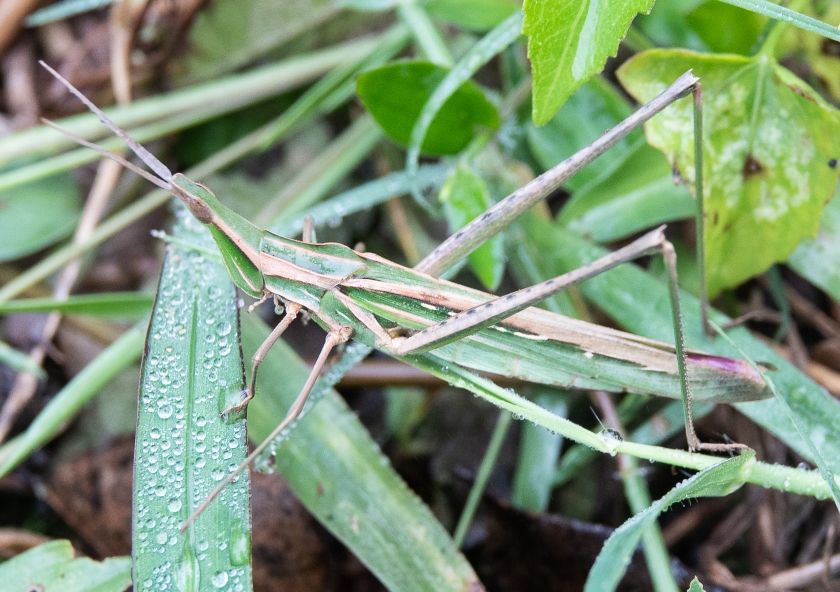 And then, a small snail on a blade of grass. It turns out that if you watch a snail for 18 minutes and 30 seconds, it reveals itself to be a remarkably agile mountaineer. It started wrapped around one blade of grass: 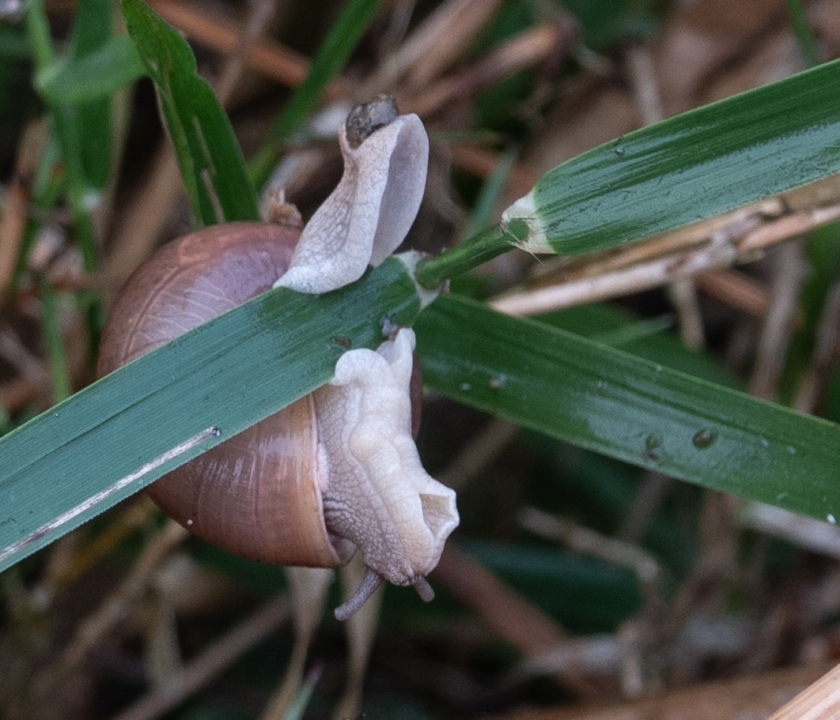 and then moved sideways to an adjacent one, without letting go of the first..

Next it fully committed to a single blade:

I was then distracted by an elephant (which is much easier to see than a bird), and when I returned my gaze to the snail it had lunged sideways onto the dried stalk next door, stretching its body so it could still stay attached to the safety of its launching pad.

In this last shot, the dead leaves rather mess up the view, but if you look carefully you can get a good idea of how elongated the snail can be at full stretch, with its rear end still attached to that dried stalk in the previous photo, and its shell carefully balanced halfway along:

In that 18 minutes it traveled about six inches, which by my calculations is an average speed of 20 inches per hour, or about .000031 mph.

Why would anyone watch birds when there are snails to be had? 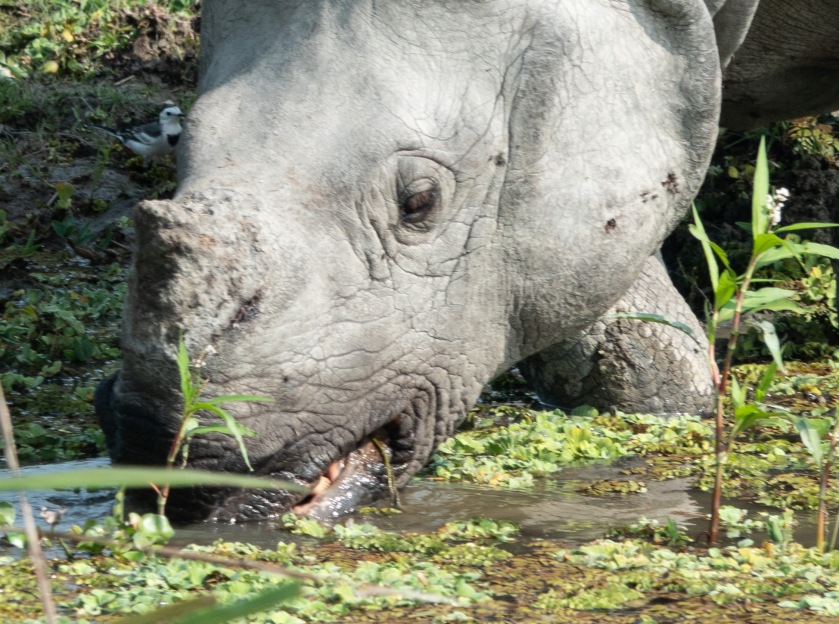 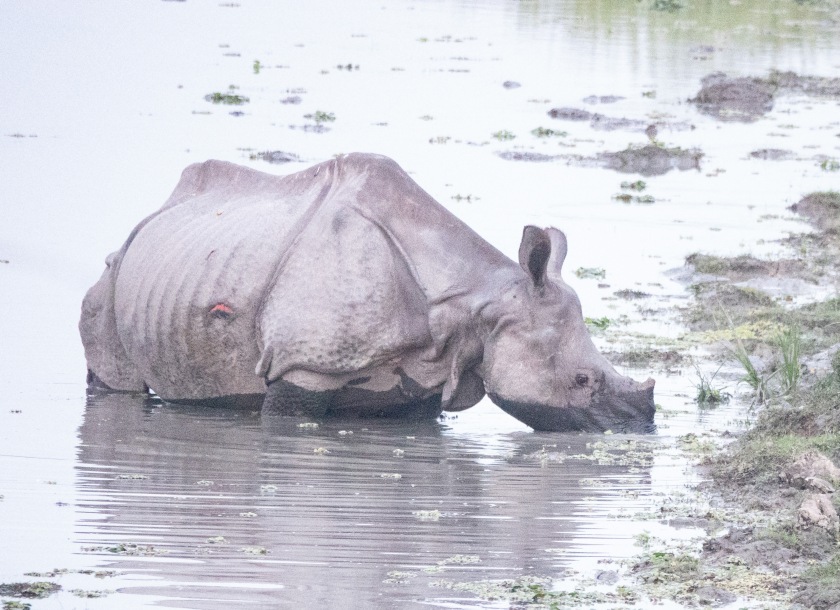 In Chitwan we saw the rhino deep in the long grass from the back of an elephant, but in Kaziranga they were everywhere, grazing out in the open, many with young.

They have a pointed prehensile upper lip like the Black Rhino, and they are semi-aquatic, feeding in and even under the water:

In Kaziranga we also went out on elephants, at dawn in a thick but magical mist : 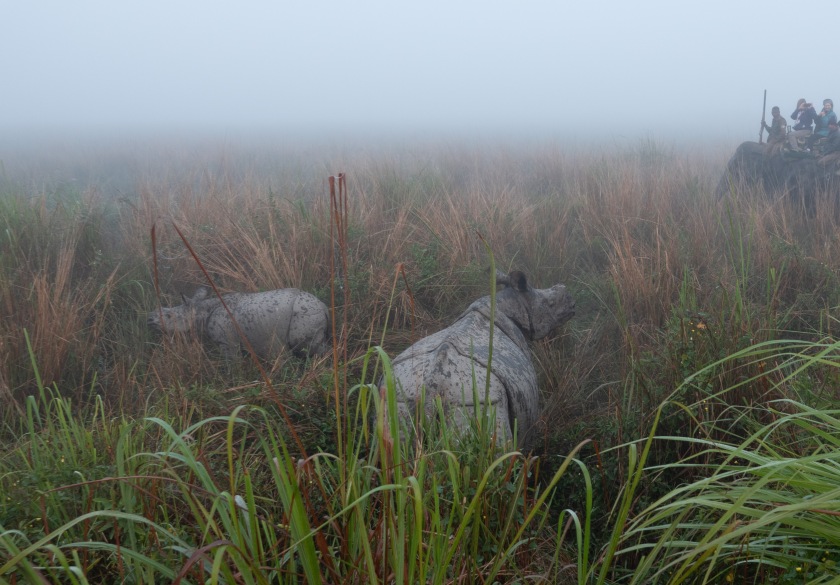 Being atop an elephant allows for close-ups from an unusual angle: 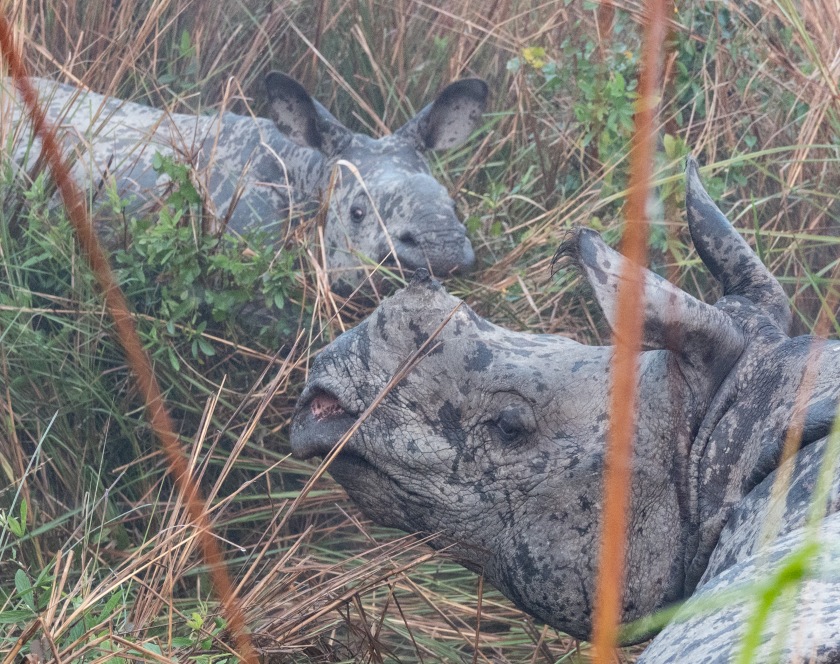 The baby has no horn yet, but you can see a smooth bump where it is trying to come through: the teething pains must be horrendous:

Personally I think it looks most irresistible from the front:

They didn’t seem overly bothered by the elephants, or vice-versa. Our guide told us that when he started 20 years ago, they would flee from tourists, but that they are now habituated, and largely ignore them.

We all know that the Black Rhino Diceros bicornis,  and the White Rhino, Ceratotherium simum, are critically endangered, but there even fewer surviving Greater One-horned Rhino, or Indian Rhino, Rhinoceros unicornis. First made famous in Europe by Dürer in 1551, in a slightly imaginative rendition (he never saw the actual rhino, which was in Lisbon), it is clearly an Indian rhino because of the astonishing thick folded skin, and the single horn. 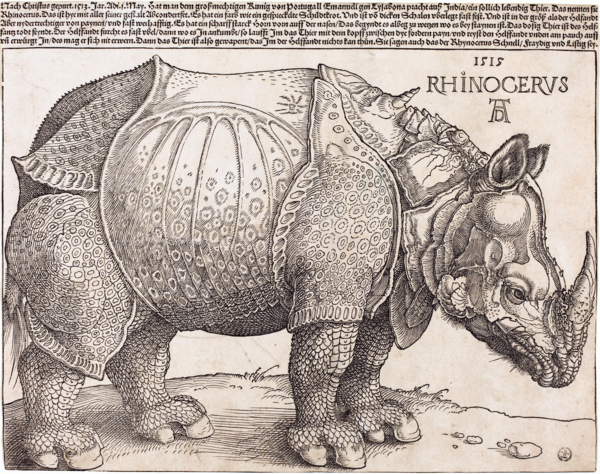 Here is the real thing; this one has worn its horn down foraging:

But this one has a fine horn: 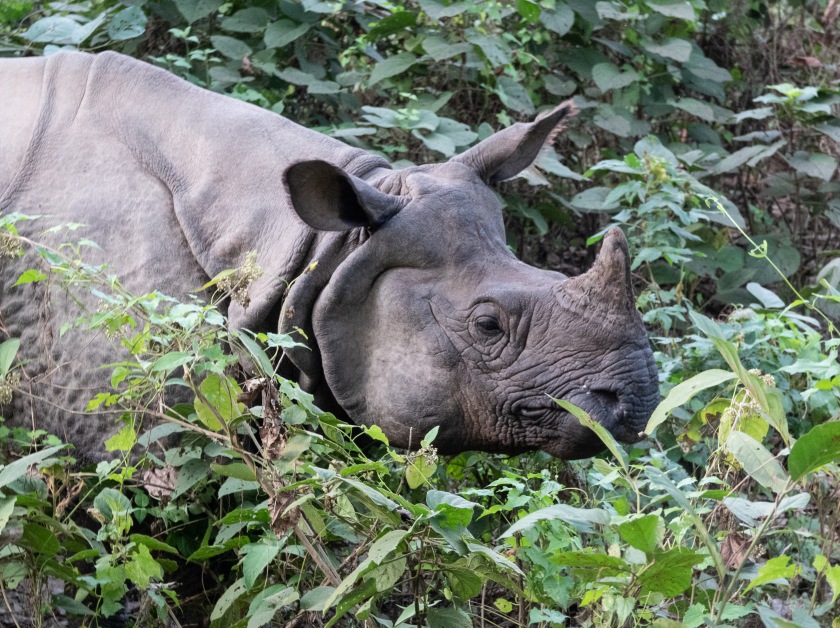 and so does this one: 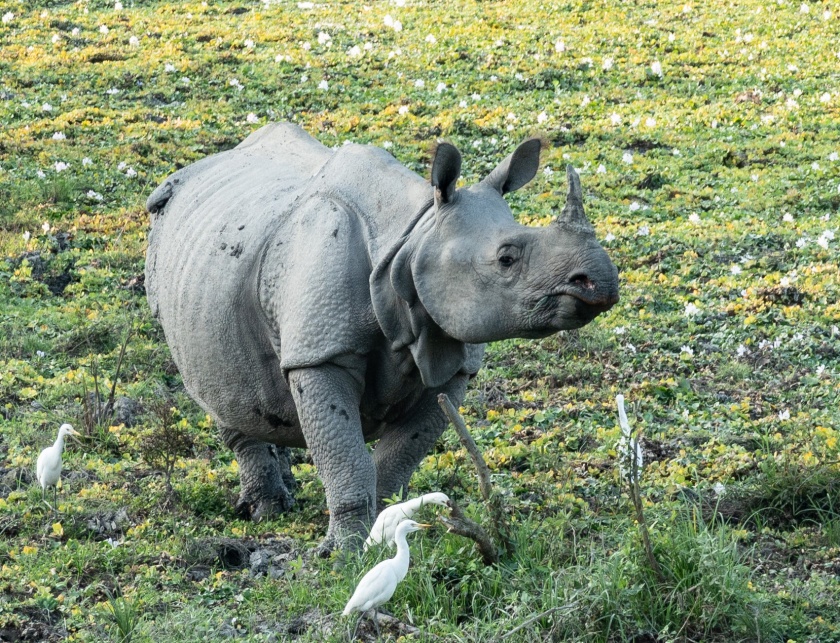 From behind, the armour-plate is even more impressive: 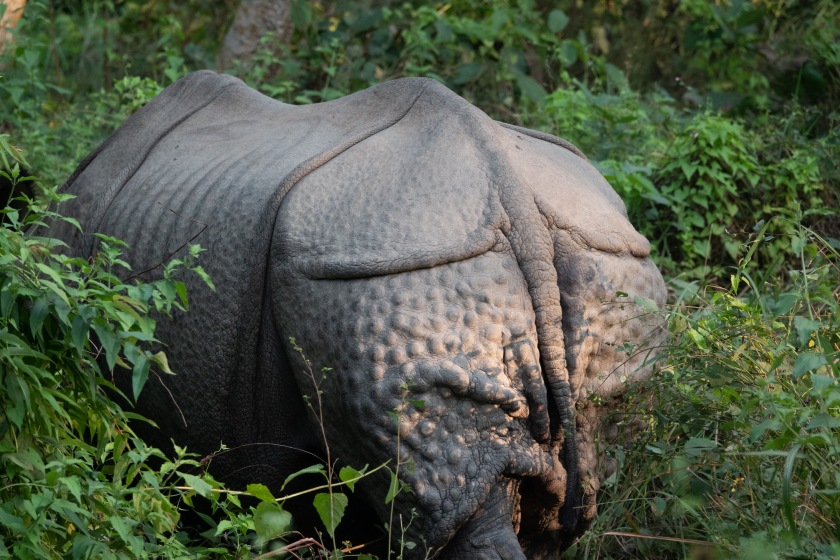 The neck folds are enough to make aging dowagers feel good by comparison: 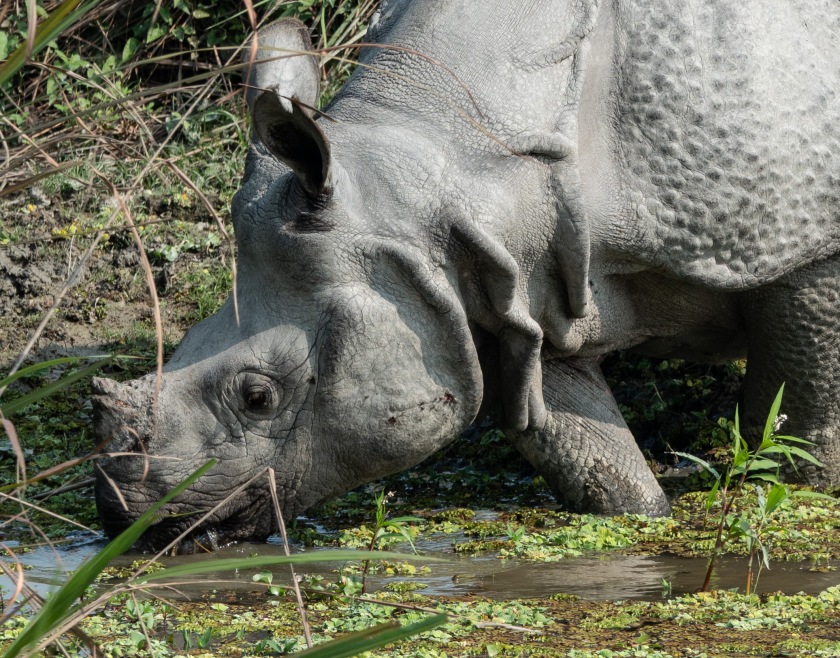 This rhino weighs as much as the African White Rhino, 1,800 – 2,500 kg, much more than the African Black Rhino. We visited the two places in the world where almost all the surviving one-horned rhino live. Chitwan in Nepal has about 600, and Kaziranga in Asaam has about 2,413 (70% of the world population of 3500).

The IUCN classifies them as Vulnerable, not Critically Endangered, because the population though fragmented is increasing. The poaching threat is apparently somewhat lower than for the African rhinos, maybe because they only have one horn, and a lot of ones we saw had worn it down? But the proximity to the major markets in China and Vietnam makes it appealing to poachers nonetheless. The anti-poaching efforts are very aggressive, and there is a great deal of concern about whether it is appropriately regulated, and its effects on the local community. Here is a disturbing article, for those who are interested:

In Part II, you will meet the next generation of rhino.

One for the birds. And next time, by popular request, I will show you rhinos

This one was on the far side of a shallow lake, hunting. Look closely, and you can see he has just grabbed a fish:

He gets a grip:

Then turns it around, head first:

And it is traveling down his gullet, all gone, in six seconds start to finish.

These storks are widespread in India, and Australia, but they are thinly distributed, and declining in numbers. There are probably about 1000 total in India, and 10,000 in Australia. They are on the IUCN Red List as Near Threatened. Kaziranga has a healthy and stable population. This one is an adult male, because males have a brown iris, and females have a yellow iris.