[This has to be done today, I feel, even though I am in the midst of an African series of posts. Normal service will resume soon. And Happy New Year! ]

On New Year’s Eve in Maine we were in the midst of a two day snowstorm that brought us 12 glorious inches of pristine snow for 2020. As soon as it ended, I went for a final snowshoe of 2019. There are old apple trees behind my barn,

with last fall’s fruit still hanging on the higher branches, and on the ground underneath. 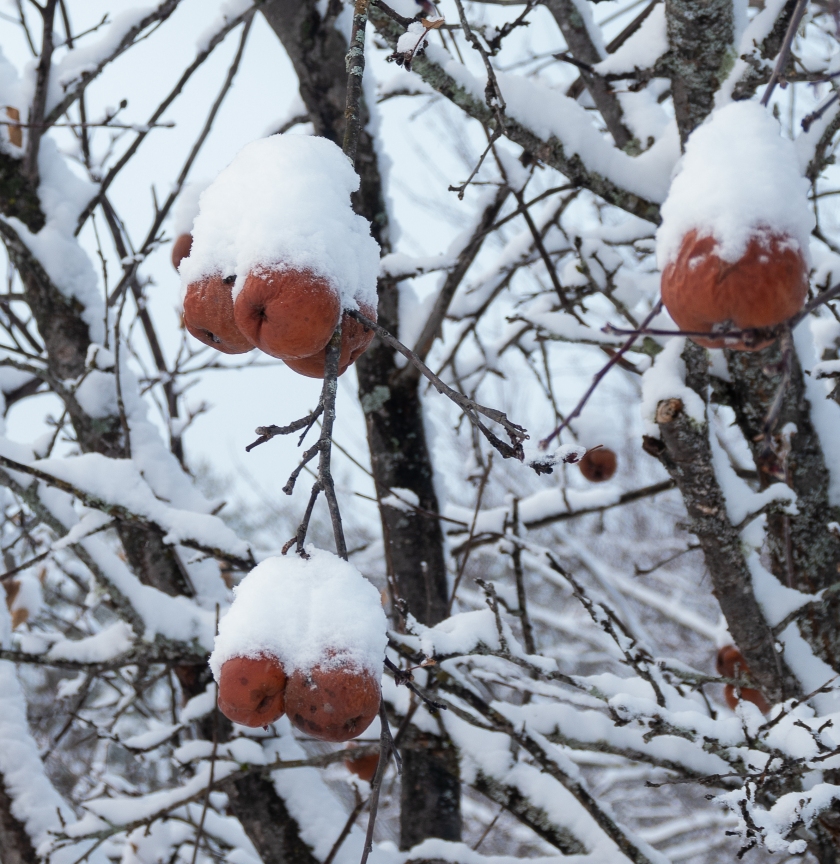 These are a magnet to a variety of animals, like this deer who had walked by some time earlier, while the snow was still falling fast*:

Back to the tree: beneath the boughs I found the debris of a life and death struggle.  From a distance, here is what I saw.

It was a recent incident;  the snow had only tapered off in the past hour, and these crisp marks had been made after it stopped. The story begins with the round disturbance at the top right, then the drag marks, leading to the denouement at the bottom left.

This is a close-up of the top right: look at the circular wing marks.

A hawk* has dropped down from the tree onto some small victim, and in fact you can see where the bird disturbed the snow on the branch of the tree above, as she perched in wait:

Having grabbed her victim, there is a short tussle as she gets a good grip and drags it leftwards.

The mouse or vole would have been under the snow, and she would have located it by ear.  A single tiny smear of blood part-way along the drag marks was the only evidence of violence.

Then here is a close-up of the final left-most disturbance: she lifts the rodent up,  and takes off, mouse-tail dragging across the snow, and her wingtips just grazing the snow in the top left-hand corner.

* I’m pretty sure the earlier pair of tracks are just deer tracks coming and going, at different speeds. The following morning 20 feet away I found fresh tracks with the gait pattern like the ones on the left in the earlier picture, with the same roughly 5 foot stride, and a clear deer imprint in the bottom of each:

**I can’t be sure what type of hawk this was. The hunting method is typical of a Broad-winged Hawk, but they don’t over-winter round here. Red-tailed Hawks and Cooper’s Hawks have both been seen in the general area this December, so it could have been one of these, but Cooper’s Hawks prefer small birds as prey. There’s a small chance that it was an owl, not a hawk.  Barred Owls overwinter in Maine, and occasionally hunt in the daytime.  If anyone can be more definitive, let me know.

3 thoughts on “A not-so-happy New Year: a hawk strikes”