Out one night with a flashlight, we came across this slender, elegant snake on a tree trunk, enjoying a late-night snack:

From this angle, the poor lizard has a disconcertingly human sacrificial appearance.

More dramatically, we were on the Napo River in a small boat watching flocks of parrots on a clay-lick, when the guides suddenly became very excited, pointing at the trees in the top right-hand corner of this photo:

None of us could see anything, but after some considerable time they calmed down enough to explain that a very large python was draped among the creepers, and it had caught a parrot. So, here are two photos taken twenty minutes apart, at a considerable distance, and from a rocking skiff,  of the cruel constrictor.

In the first one, the poor parrot is being slowly asphyxiated. 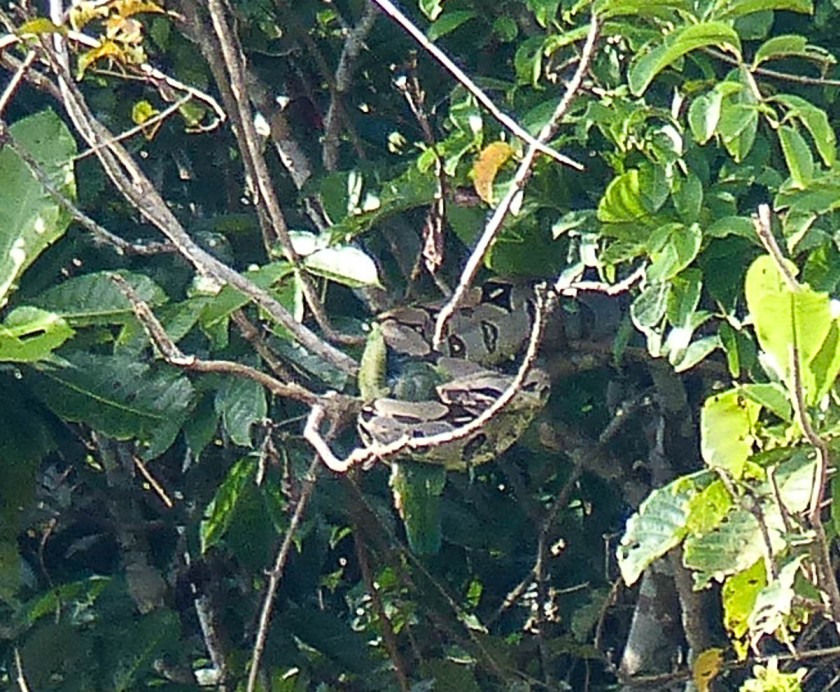 And in this second one, it is halfway down (actually, up) the snake’s gullet, beak first (which you would have thought might be rather painful, but then feet first wouldn’t be great either).

A Red-tailed Boa, by the way, can get big enough to eat a deer, so a mere parrot doesn’t have much chance.

To cheer you up, here are the ones that got away.

One thought on “(Monty) Python”