The Sherborne Estate includes farmland and parkland landscaped in the eighteenth  century, in the era of Capability Brown. The designer was Charles Bridgeman. No aristocratic landscape would be complete without the right sort of decorative wildlife.

A rainy weekend, but the weather eased enough for a misty walk, and there above us on the hill posed a herd of fallow deer, with a fine buck at their centre. The photo makes it look as though he still has velvet on his antlers, but that is a trick of the light. At this time of year the velvet has long gone. Fallow deer are the only deer in the UK with palmate antlers (like moose), and at 3-4 years the antlers can be 70cm long.

Some fallow deer are pale fawn and spotted  (at least in summer); but these are plain and darker. The male can measure up to 94cm at the shoulder, and weigh up to 94Kg. They were originally brought to England from the Western Mediterranean by the Romans.

In the seventeenth century the Duttons (owners of Sherborne) built a deer-coursing lodge, Lodge Park (owned by the National Trust). Deer were chased by dogs, and killed in front of the lodge as a spectacle for honored guests. Luckily those days are gone, but Lodge Park is worth a visit..

Down by the brook there are currently five resident swans, three above the weir and two below it. The pair below the weir are older, and the cob (the male) defends his territory fiercely against the upstart youngsters further upstream. Here they are in the shallows, preparing for their pas de deux: 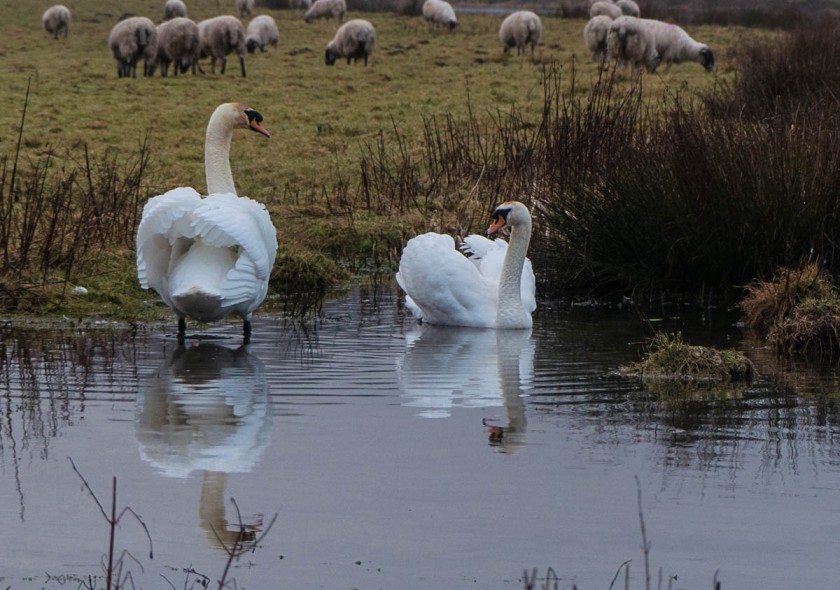 One thought on “Landscape Ornaments”