The Luangwa Valley was once called the Valley of the Elephants, and was estimated to have 250,000 elephants. The population plummeted and in 1989 was estimated at 18,000. Poaching and snaring have been aggressively controlled, and it is now stable at around 20,000, if not increasing. The Great Elephant Census* aerial survey, helped by the Nature Conservancy,  was conducted from September 4-26, 2015, over 21 million acres of Zambia. Encouragingly, there are elephants with large tusks (this photo was taken by me over the head of my guide):

and there are calves of all sizes in every group you see. At birth, they weigh about 250 lbs (100Kg). There a few guidelines to aging the babies. If it can still walk underneath its mother’s belly, it is under a year old, like this one. 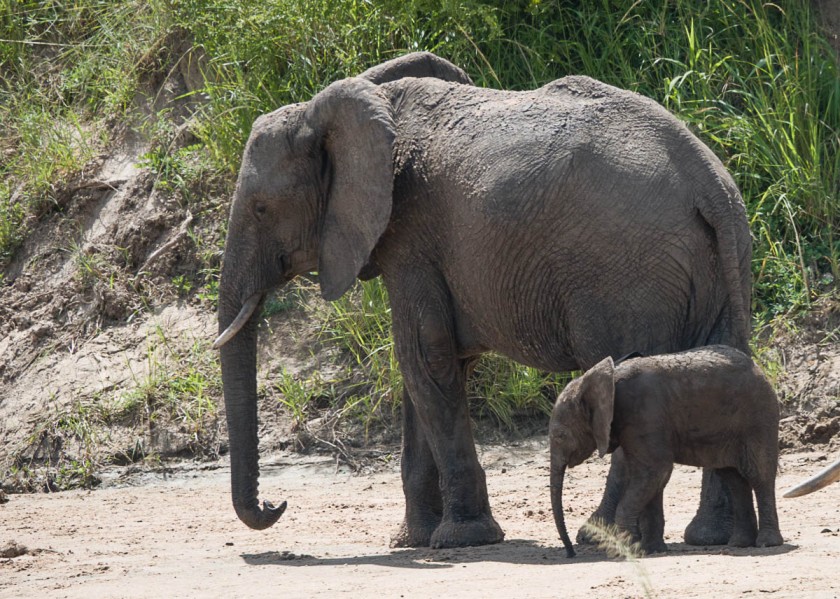 This next one, with his mother’s tail to the left for scale,  is getting used to his trunk. It takes them six months or so to get the hang of it:

This one is older, and he is having a good scratch behind his ear. I chose this photo because you can just see the start of his very first proper tusk. They come in at about 2-3 years old, and are really elongated incisors. (The earlier milk tusks which are present at birth drop out at about one year old, and are only 5cm long.)

I spent some time trying to get a photo showing how they manage the mechanics of nursing. For their mouth to reach the nipple, the trunk has to be got out of the way, which isn’t easy. They drink 3 gallons of milk a day, so they have to master it pretty quickly.

PS We all worry about poaching. The Great Elephant Census, which was carried out all across Africa, showed areas of catastrophic decline, and also areas of encouraging stability or even increase. In Zambia, the report says that  ” … the ecologists were not only counting live elephants, but elephant carcasses and the approximate age of those carcasses. A “carcass ratio” — the ratio of dead elephants to all elephants (alive and dead) — of 2 percent to 8 percent is considered normal for a stable or increasing population. The overall carcass ratio for Zambia was estimated at 4.2%, meaning that the observed deaths were within sustainable levels.” See here for more detail.

2 thoughts on “The Valley of the Elephants”