My two travel companions are birders, so one morning at around 6.30am I found myself standing in Chitwan, in the wet reeds, in the mist, trying and failing to see various very small birds. So I wandered around looking for other interesting things. First, the aptly named Toothpick Grasshopper (our guide’s name for it; I think it is a member of Atractomorpha, which means ‘arrowhead’):

And then, a small snail on a blade of grass. It turns out that if you watch a snail for 18 minutes and 30 seconds, it reveals itself to be a remarkably agile mountaineer. It started wrapped around one blade of grass:

and then moved sideways to an adjacent one, without letting go of the first..

Next it fully committed to a single blade: 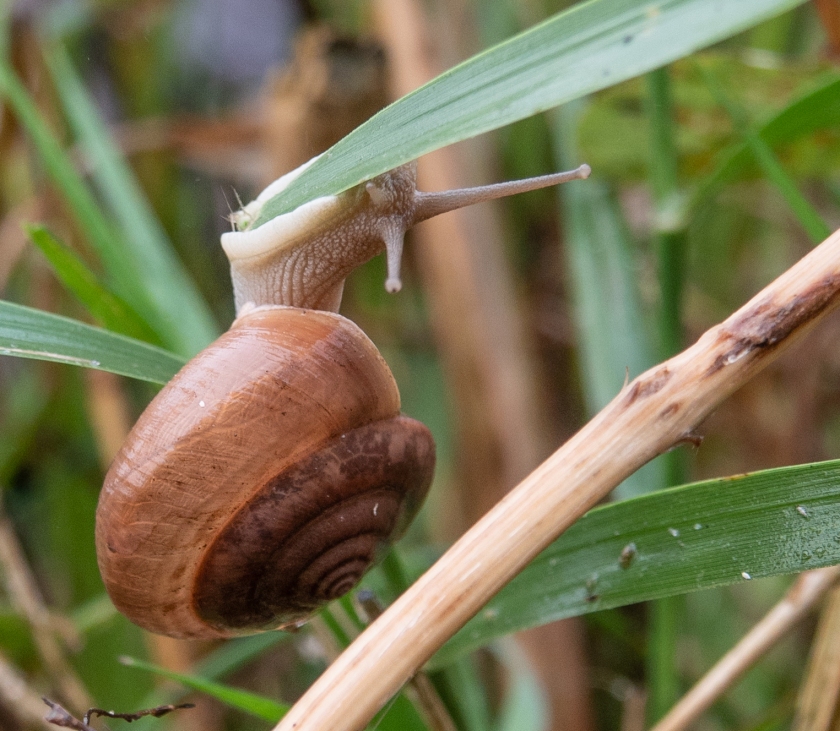 I was then distracted by an elephant (which is much easier to see than a bird), and when I returned my gaze to the snail it had lunged sideways onto the dried stalk next door, stretching its body so it could still stay attached to the safety of its launching pad.

In this last shot, the dead leaves rather mess up the view, but if you look carefully you can get a good idea of how elongated the snail can be at full stretch, with its rear end still attached to that dried stalk in the previous photo, and its shell carefully balanced halfway along:

In that 18 minutes it traveled about six inches, which by my calculations is an average speed of 20 inches per hour, or about .000031 mph.

Why would anyone watch birds when there are snails to be had?