Nursery Web spiders lay their eggs on a silk pad, and then wrap the whole thing in several layers of thick silk until it is spherical. They guard this egg sac carefully, carrying it around with them. This one was on a milkweed pod: it is a Pisaurina brevipes.

In closeup, you can see the six eyes, and also the short furry pedipalps; they use their jaws and pedipalps to carry the egg sac.

The sac contains a few hundred eggs. When they are ready to hatch, the ever-vigilant mother builds a tent-like web structure and places the egg sac inside it. This nursery is what gives the species their name. When the young emerge they are fully formed tiny spiderlings, and stay inside the tent for about a week, while she guards them.

This different much smaller unidentified species has an egg sac too:

To the right, just visible behind the leaf, is a predatory insect lying in wait, so these eggs may not have long for this world.

Some spiders hang their egg sacs from a thread. I think these exquisitely decorative hanging egg sacs are created by the Common House Spider, Parasteatoda tepidariorum, although the photos I can find online don’t have this marvelous oriental lantern shape, so it is possible it is some other species. 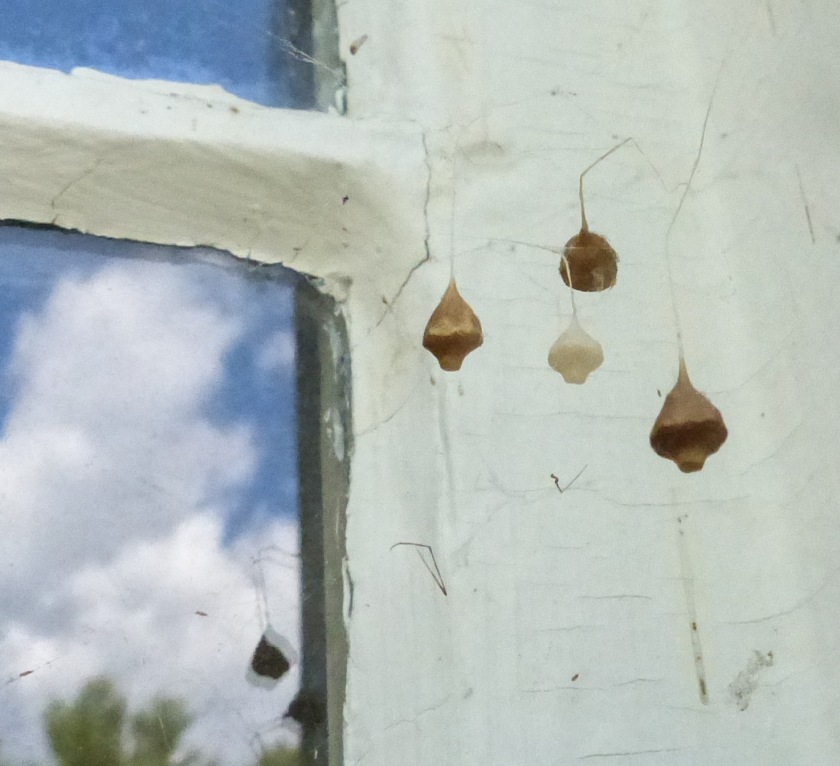 Next time you shudder at a spider in your bathtub, try to remember their softer side. Louise Bourgeois’s giant Spider sculpture (1996) was conceived of as a tribute to her mother, who was a weaver, and its protective posture reminds me of all the maternal spiders out there.