[This post is the first of several about these remarkable cetaceans. I’ve decided to stretch it out over three or four posts because I figure you are all as bored as I am, or soon will be. I hope in these difficult times when we are all cooped up at home it helps you remember there is a big beautiful world out there that we will one day see again.]

My trip to Mexico was prompted by tall tales of gray whales that come up to small boats to be stroked. Hard to believe, right? And yet it is true. Proof:

The calf has its rostrum (upper jaw) out of the water, and its barnacle-encrusted blowholes on the right of the photo are closed. Its left eye can just be seen at water-level. And I am stroking a baby whale.

The gray whale, Eschrichtius robustus, is smaller than the blue whale, weighing about 40 tons and measuring about fifty feet, but even so it gives birth to a fifteen foot calf.

The Eastern Pacific population of whales spend their summers in the Northern Pacific feeding, then migrate down the coast of North America to mate and give birth in the quiet lagoons of Baja California. This migration is a round trip of up to 14,000 miles, one of the longest of any mammal. If you go to Baja between January and March, you stand a high chance of seeing them while the calves are building up blubber for their long journey north.

We stayed in Camp Ramon on the shore of San Ignacio Lagoon:

and went out twice a day in 23 foot skiffs called pangas, wading out to them in the wellies thoughtfully provided by our hosts. 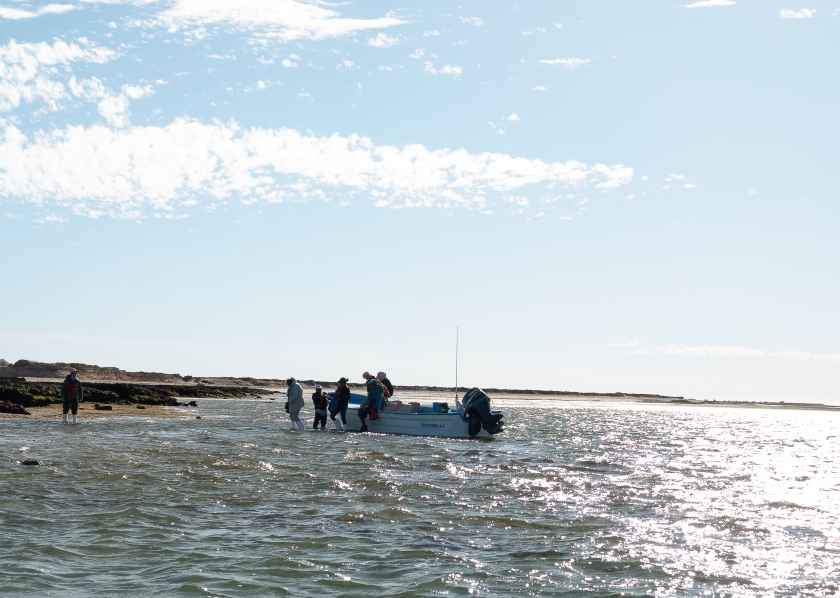 The park authorities allow a maximum of 16 boats in the area on the lagoon where whale-watching is allowed, and only 2 boats are permitted near any individual whale. The area is large, many square miles. In practice we never had to share a whale.

Here are a mother and calf swimming side by side: 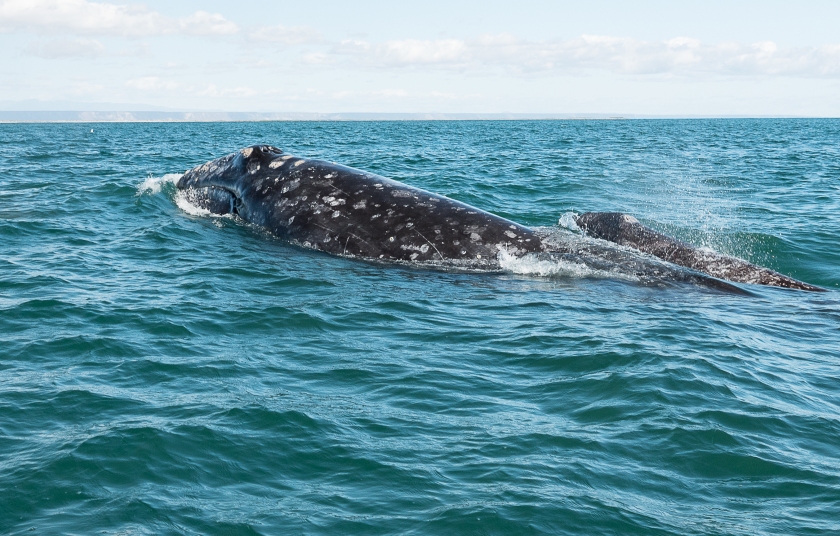 Some whales are skittish round the boats, as you would expect, keeping a certain distance, maybe swimming around the boat or under the boat, but not coming alongside. But for whatever reason some have decided the boats are large friendly blue creatures with tentacles that reach out and pat them, so they bring their calves to the boats and allow them to be greeted by us humans. 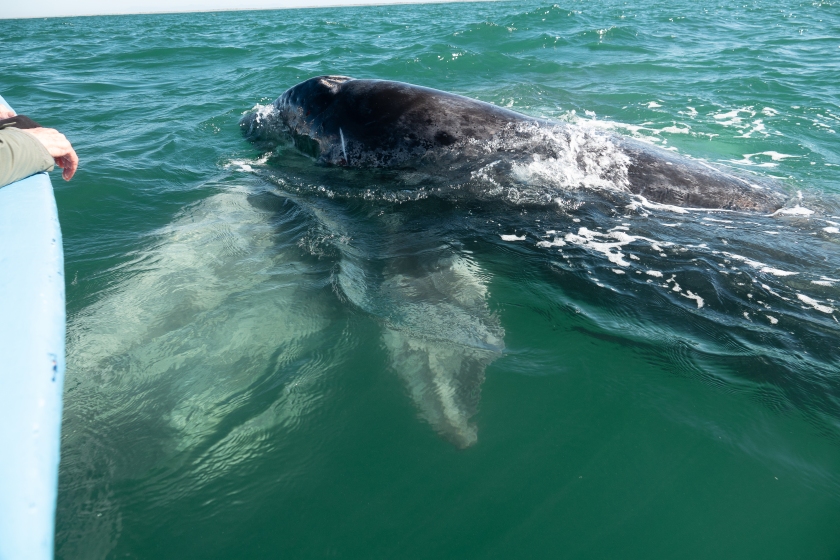 When they come close, they are exactly like very very large puppies: 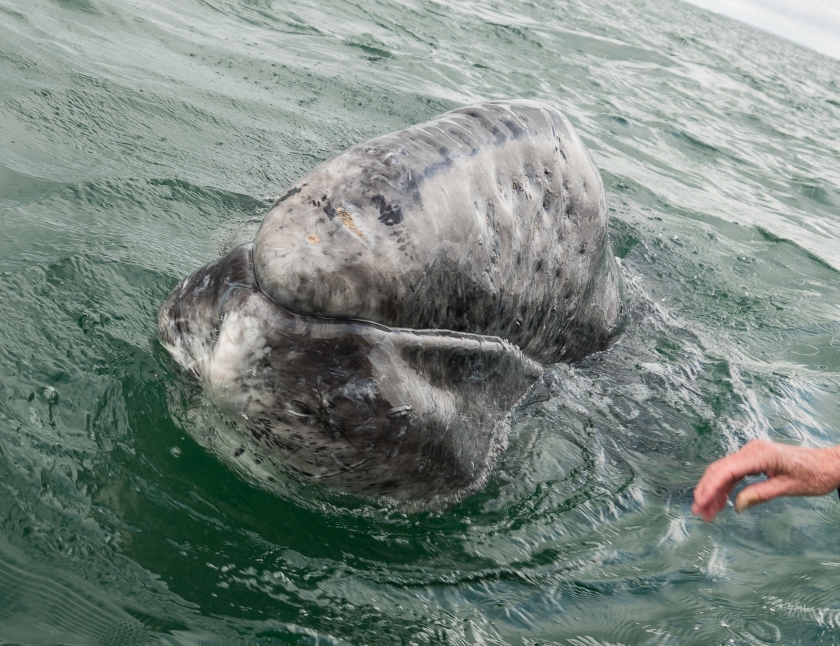 Gray whales were hunted almost to extinction in the 18th and 19th centuries. They were known as “devilfish” because they defended themselves when hunted, often overturning small whaleboats: unreasonable, really. This is what they look like when approaching your small boat at high speed: quite intimidating if you have reason to think they are intent on revenge: 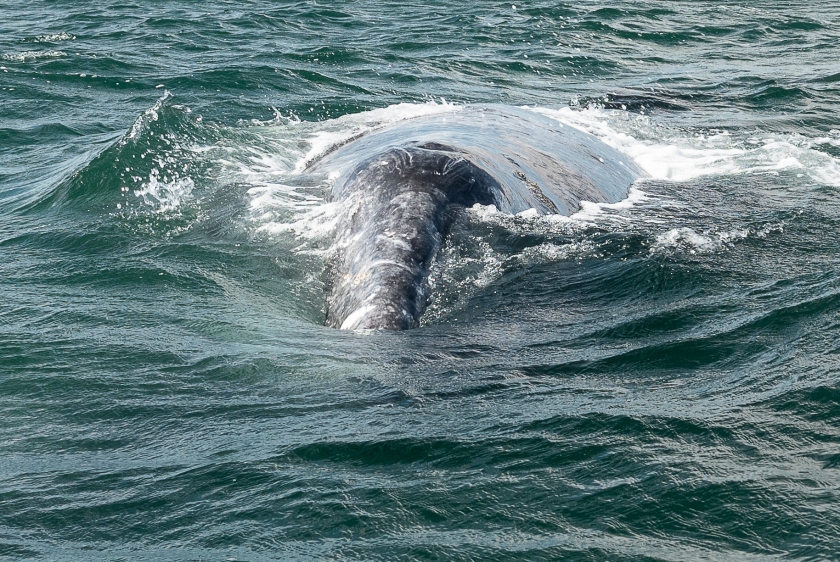 Captain Scammon, a Mainer who discovered one of the the Baja calving lagoons, worked out that if he harpooned the baby the mother would come close to rescue her, and then he could easily harpoon the mother too. It’s quite hard even to think about it nowadays.

The global population has, remarkably,  recovered to close to pre-whaling levels of 20,000. Usually the San Ignacio Lagoon count (in January, when both mating and birthing happen), is around 400. This year, worryingly, it was only 150, and no-one knows why. The hope is that they just went to a different lagoon, but those counts are not yet in.

Next time I’ll talk in more detail about how they look, feed and move.

6 thoughts on “Fifteen-foot babies: The Gray Whale I”