[This is not my usual nature post. Rather than discussing whaling in my other gray whale posts, I though I’d do an entirely separate one. Some people are very interested, others would prefer to move on. Up to you.  This is my last whale post. Next time I return to Maine.]

The Makah Indians of the Pacific Northwest have traditionally hunted grey whales from canoes, as shown in this 1883 drawing: 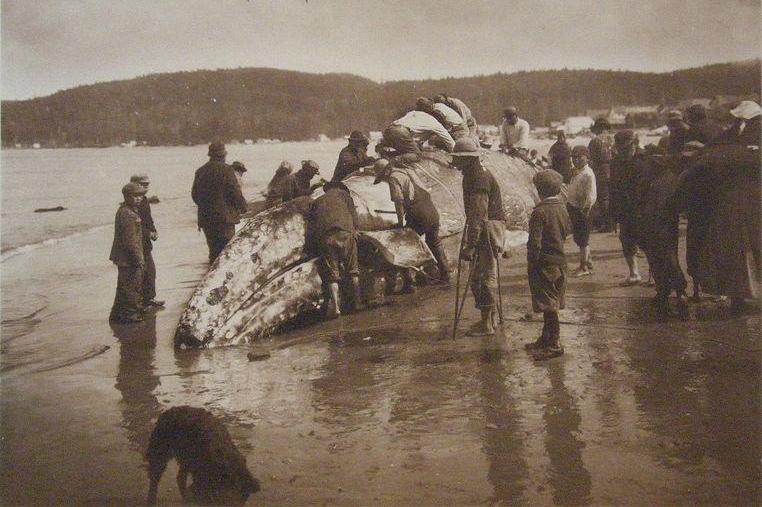 The numbers they caught were small, and a healthy gray population was not heavily impacted.  In the North Atlantic, however, countries like Iceland hunted them from at least the 1300’s and for whatever reason by the late 1700’s gray whales had disappeared from that ocean.

In the Pacific, when the European settlers came and started to catch gray whales on an industrial scale, things changed. One pivotal event was Captain Charles Scammon’s discovery of the calving lagoons. 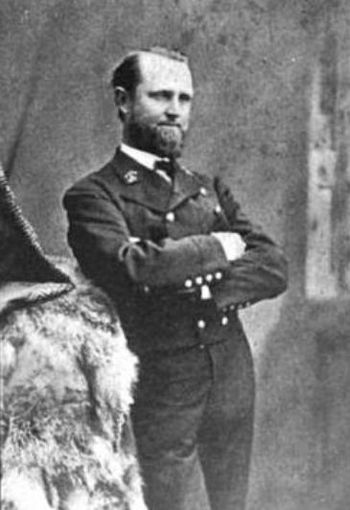 Born in Pittston, Maine in 1825, about 90 minutes from where I now sit, he discovered Ojo de Liebre lagoon (now called Guerrero Negro), and caught whales there from around 1857, and then in San Ignacio lagoon (where I was) two years later. Within a few years they had killed so many whales that they had pretty much emptied the calving lagoons. Later in life Scammon wrote an apparently unsuccessful scientific book about whales, which is now ironically highly thought of.

In Baja California, the whalers were often based on land and went out in small boats. It was a dangerous occupation; the gray whales frequently overturned the boats, or towed them for long distances.

Nonetheless, they caught whales in huge numbers. Between 1845 and 1874 it is estimated that whalers killed over 8000 whales, a disproportionate number of which were mothers with calves.  Dead calves were not counted, so the actual numbers were much higher.

It looks rather charming here, but the reality was quite different. 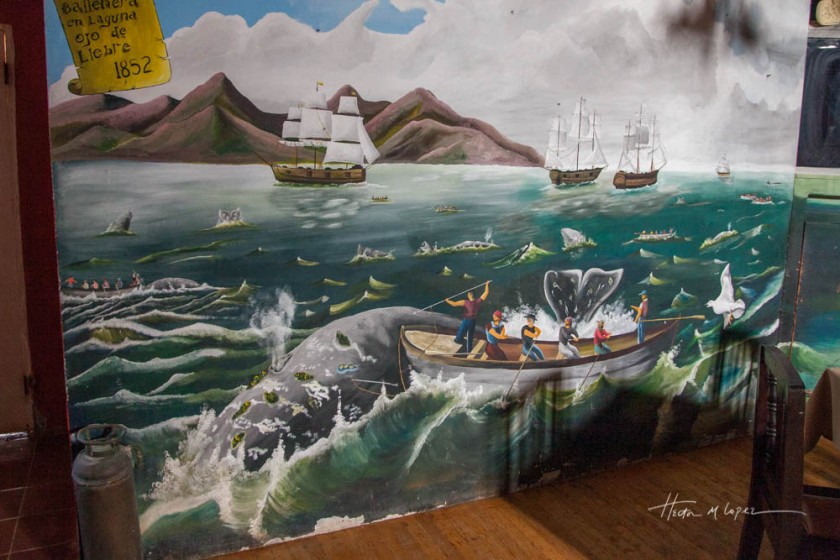 By 1875, industrial-scale whaling of gray whales was over, and it is thought that no more than 1-2000 whales were left alive, though one estimate was that only 160 remained. In the 20th century only 4 countries continued to hunt gray whales: the USA, USSR, Norway and Japan. They used cannon-fired explosive harpoons, and killed a total of 2407 between 1910 and 1946.

Whaling for gray whales was banned for commercial purposes in the US and Norway in 1937, in the USSR in 1946, and in Japan in 1951. Aboriginal peoples have special quotas for subsistence whaling, about 160 whales per annum worldwide. In 1971, the Mexican government protected the calving lagoons as marine wildlife sanctuaries, and in 1993 they became part of the huge Vizcaino Biosphere Reserve, a UNESCO World heritage site.

It seems, then that we are somewhat atoning for our barbaric treatment of gray whales in the 19th century by finally affording them the protection that they desperately needed and deserved. It is heartening to see that recovery on this scale is indeed possible.

I am indebted to James Sumich’s wonderful 2014 book E. robustus: The Biology and Human History of Gray Whales.

The article below came out this month, and is an authoritative overview of what has been done, can be done, and should be done to rebuild marine life in general.

4 thoughts on “Whaling and the Gray Whale Population”