The Porcupine by Ogden Nash

Any hound a porcupine nudges
Can’t be blamed for harboring grudges.
I know one hound that laughed all winter
At a porcupine that sat on a splinter.

Porcupines are not popular around here, because they chew on wooden structures, and in New England the houses and barns are built of wood. They are largely nocturnal, so I don’t see them very often. But the other day I emerged from the woods with the dog, who luckily was on a leash, and in the field, back to us and quietly munching, was a sizable porcupine.

The dog was frantic to go and make friends, not at all a good idea, but I wanted to get closer too, to take pictures, so I slowly moved in, and the porcupine either didn’t know or didn’t care that I was there. They have dreadful vision, but a good sense of smell, so here it is realizing there might be something different in the air (me and my beagle):

Eventually, some walkers came up the road, the porcupine turned away from them and towards me, and realized that retreat was wise.

They don’t run, they just waddle, and then they erect those spines in a great halo:

They do not shoot their spines, but they detach very easily if the barbed end gets stuck in an unlucky dog. Their defense strategy, which often means standing their ground, turning their back and relying on those spines, doesn’t always work. I once saw one in the middle of a dirt road. He stood stock still, and tried this strategy on my truck, but the truck was unimpressed.

They can have up to 30,000 quills on the back and tail, but the face and belly are free of spines, leaving them vulnerable to fishers and coyotes. The ferocious claws enable them to climb trees, and in the winter they eat mainly hemlock needles and bark, and will climb high to do so. 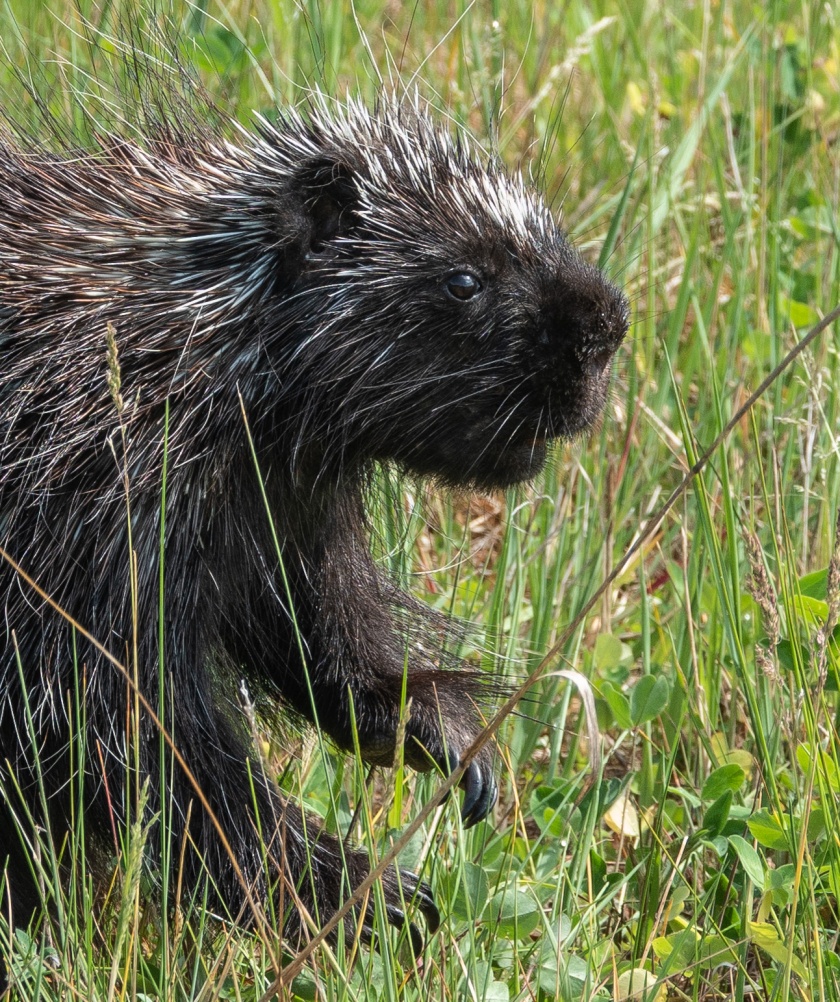 Some years ago walking in my back woods I met this baby. The mother must have been off foraging, and had left it on a fallen tree, so I got very close, and it was quite quite charming:

PS Unlikely though it may seem, spines have evolved more than once. New World Porcupines, like this Erethizon dorsatum, have evolved their spines entirely independently from Old World Porcupines, though both are rodents. And hedgehogs are even more distantly related, not being rodents at all.  The Australian Echidna is a monotreme, an egg-laying mammal. And then there is the Porcupinefish… A lovely example of convergent evolution.