Sacred Ibis (Threskiornis aethiopicus) are found throughout Africa, from Egypt to the Cape, and are common in South Luangwa. They roost in large groups, sometimes mixed in with other birds, like these egrets. Breeding colonies can apparently sometimes reach 20,000 birds!

Caught in flight, their wingspan is impressive, up to 1.24 meters, or over 4 feet.

You have to admire the strength and skill it takes to land a bird this size, weighing 1.35 kilograms (3 pounds).

In breeding season, the naked red skin under the wings turns bright scarlet:

As you can see, the head and neck are bare, but the feathers on the rest of the body need a thorough preening.

The scimitar-like bill is used to probe around in soft mud and sand for snails, frogs, and aquatic invertebrates. In the aerial photos you can see that the feet have widespread toes, to help spread their weight in the muck. They migrate several hundred miles to breed, within Africa, but they never cross the equator. Northerners stay north, southerners stay south: the Mason-Dixon line of the sacred ibis world.

The Ancient Egyptians venerated them as the symbol of the god Thoth, the god of science, among other things. Thoth was thought to have created hieroglyphic writing (hence the title of this post), and the hieroglyph for Thoth’s own name includes an ibis:

I like to think that the black bill reminded them of a pen dipped in ink.

The Egyptian statue below is in the Copenhagen Museum. The sculptor got the big feet right too. 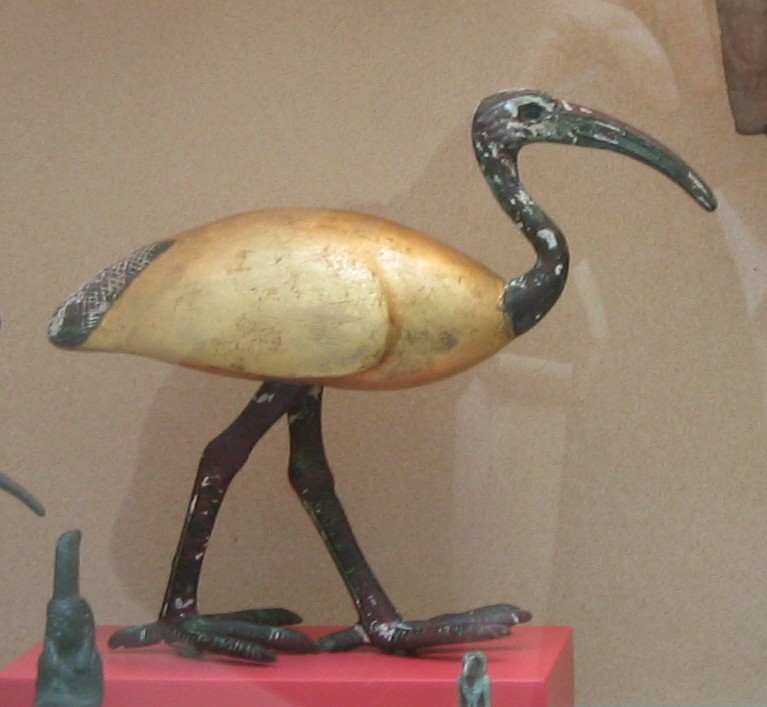 [Thanks to an unknown photographer for this photo.]