Back to the present, and the less exotic. Behind my house in Maine there is a small beaver pond, currently seemingly abandoned since the dam is not being maintained.  These ponds are scruffy places, full of dead trees, but they create openings in the dark forest that are home to all sorts of wildlife. All the photos in this and the next posting were taken last week on my pond. The small teepee-like pile of sticks, background, left of centre, is the old beaver lodge, and as you can see I had to take my photos from some distance. 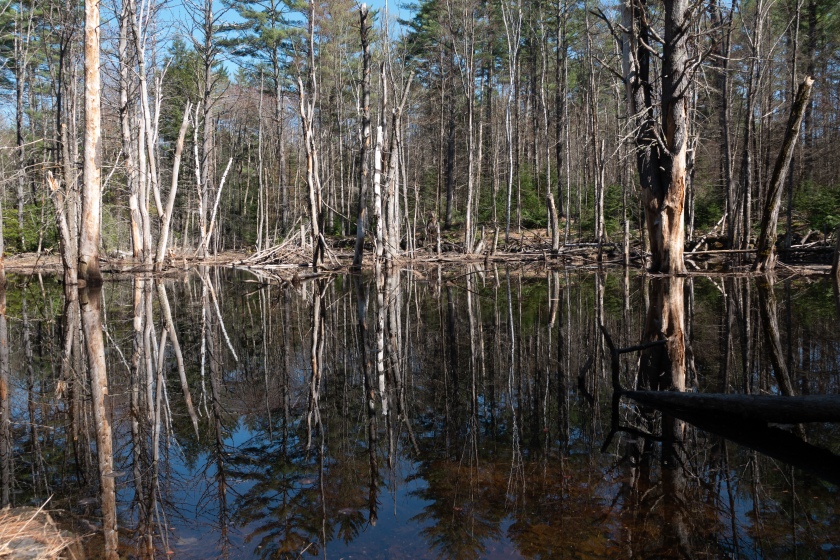 There are two muskrats living in the pond this spring.

Muskrats, Ondatra zibethicus, are about a foot long, with another 10 inches of bare black tail.

At first glance they could be very tiny beavers, but the tail is quite different, round at the base and then flattened vertically: 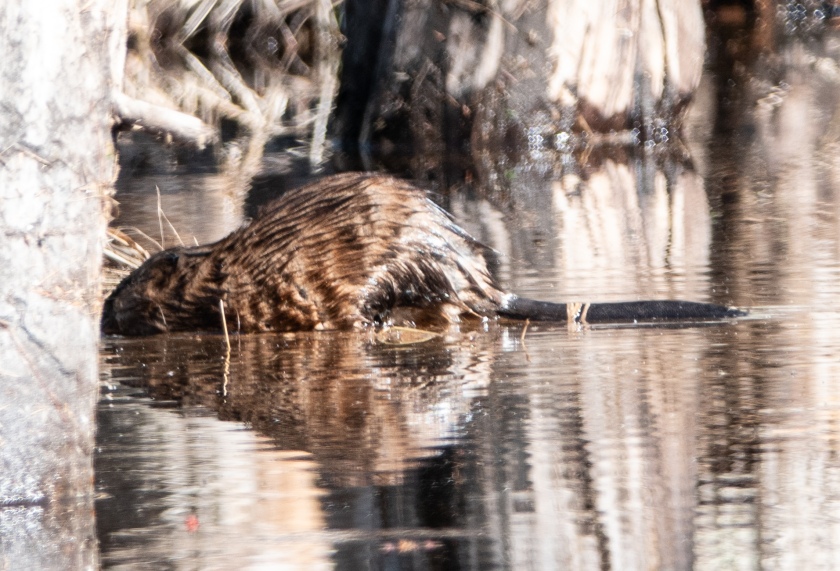 They are living in the old beaver lodge, and they emerge to eat roots, rhizomes, shoots and leaves, which they wash obsessively first, before eating them delicately: 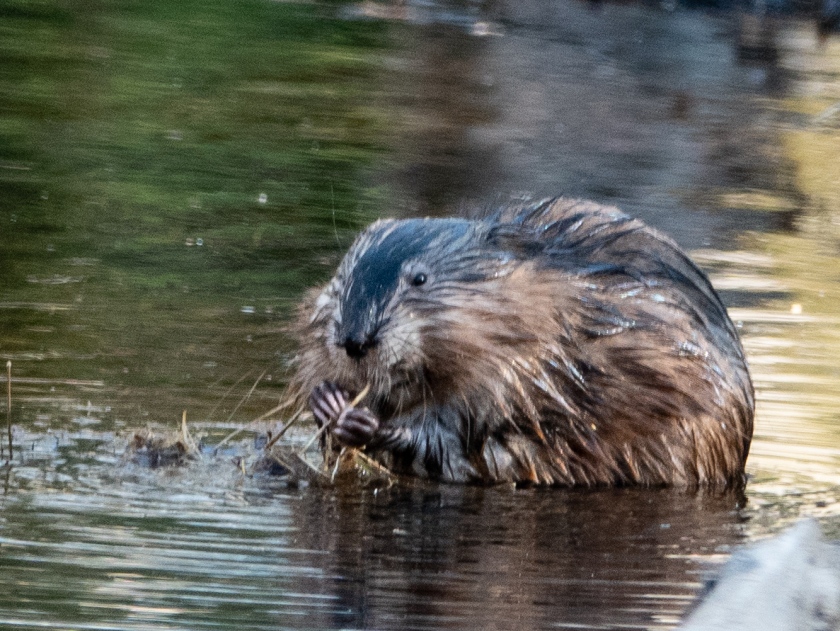 This video shows one eating, washing,  and eating its lunch, in their typical frenetic fashion:

They are feeding from a feeding station in the middle of the pond, exactly at water level, so that they can reach to wash their food easily, and are also safe from predators. If the water level goes up or down, they choose a new feeding station. They slide off to get more food, and return to the same spot for the next course. Their front feet are able to manipulate the food with great precision: 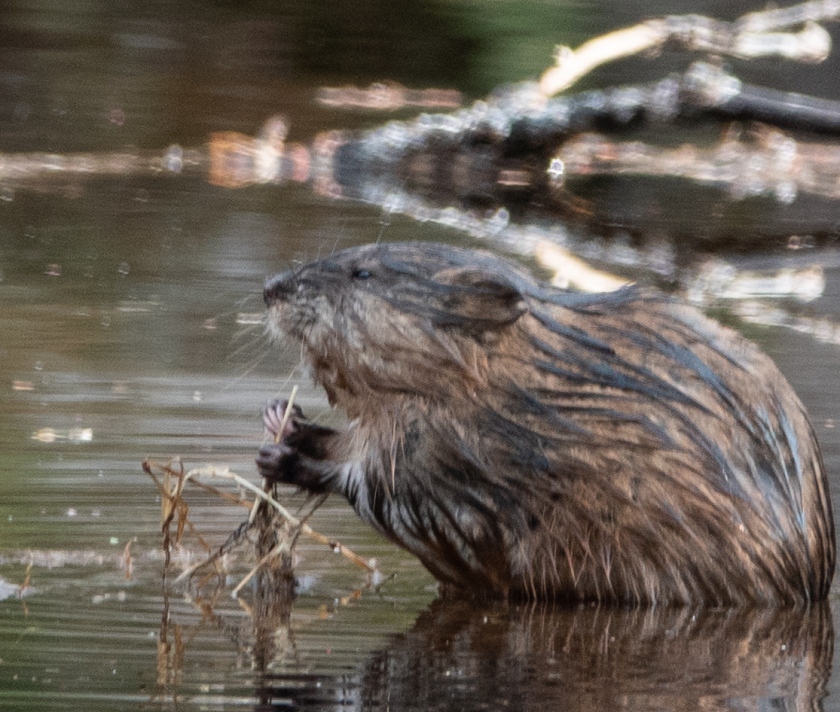 Their hind feet are much larger: 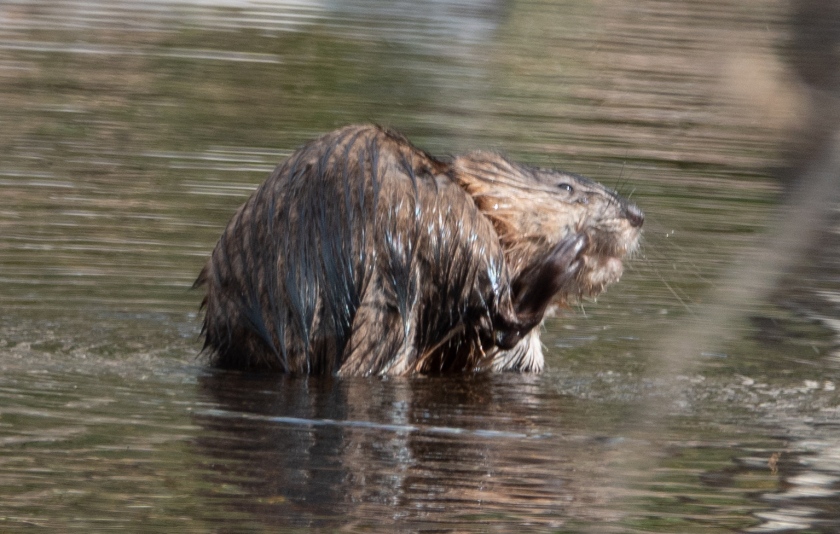 I suspect they have young in their lodge, because the next morning they were busily diving for vegetation, then taking it straight back to the lodge, instead of eating themselves: 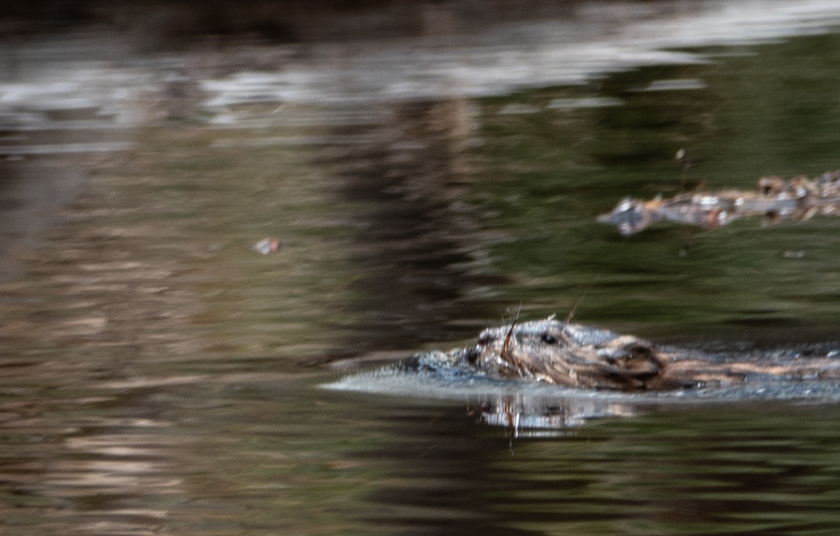 A litter will have 4-6 kits, and they are born naked. When the mother leaves to feed, she covers them with shredded vegetation to keep them warm, so this may be bedding, not food, that she is carrying back. They are ready to live on their own by 4 weeks, and she may have 3 litters a year.

In the winter, muskrats gather in groups in larger lodges for warmth, and move around under the ice, making occasional holes through which to breathe and feed..

PS In its native North America the muskrat is doing fine, although it used to be heavily hunted for its long thick fur. 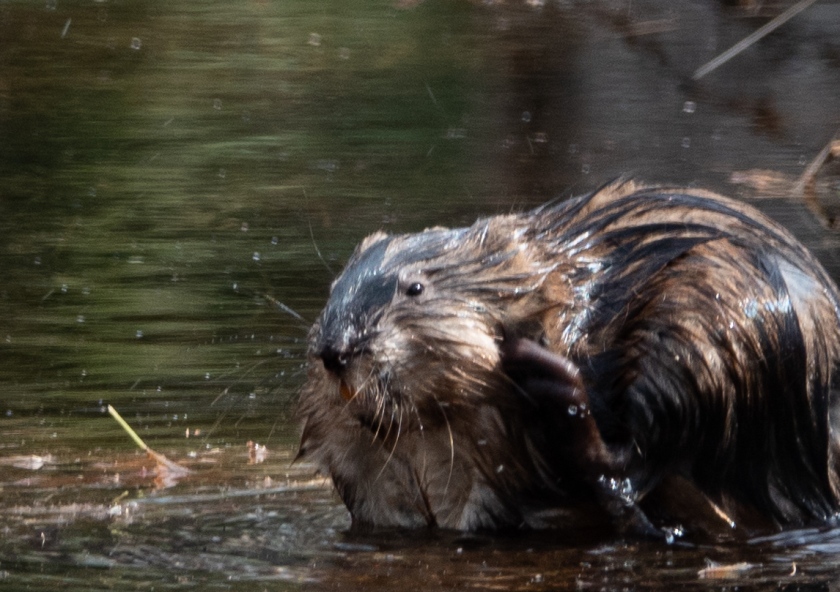 It was introduced into Europe for its pelt, but has now become a serious pest in some countries, where among other things it burrows through Dutch dykes, presumably creating jobs for little Dutch boys who use their fingers to plug the holes ….

PPS Ratty in Wind in the Willows, is actually a water vole. He is on the left below. He is about 2/3 of the length of a muskrat. 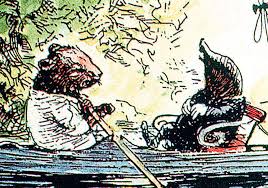 “Dependable and thoroughly decent, with a fondness for impromptu picnics and impeccable taste in clothes, this twinkly-eyed country gentleman would take you out for a glorious day on the river before asking you, as the sun began to set and he draped his jacket over your shoulders, whether you’d care to have dinner with him next week.”

In 2011 readers of Country Life ranked Ratty second only to the gamekeeper Mellors in Lady Chatterley’s Lover as their favorite “lusty literary hero”.