As I was sitting quietly on a log watching the muskrats, a male Wood Duck, Aix sponsa, flew in right over my head and landed in front of me. In the 20 seconds or so before he noticed me and took off in hurry, I managed a photo: he is in full breeding plumage, very splendid: *

The second half of the scientific name, sponsa,  alludes to his resplendent turnout, in the hopeful expectation of being the groom at a wedding.  His intended spouse,  however, was nowhere to be seen.

The next morning, more water birds.  These are Hooded Mergansers, Lophodytes cucullatus. 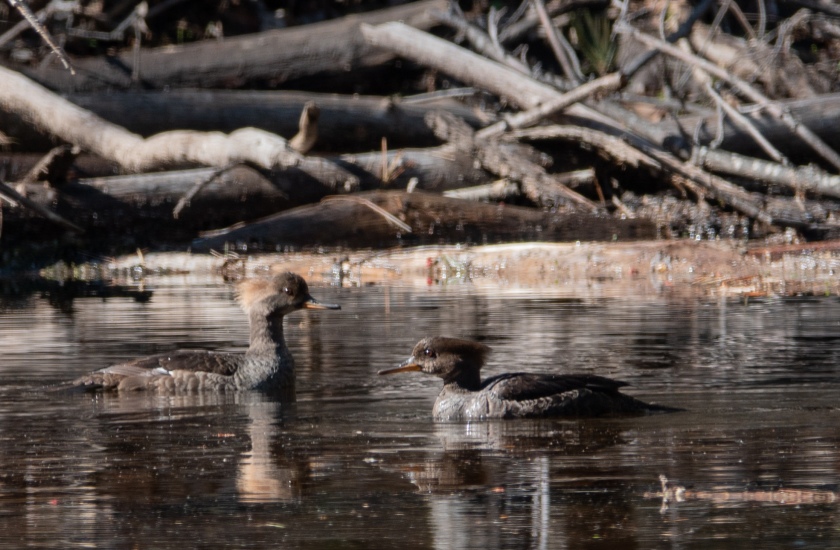 Another apt name: cucullatus is related to the word cowl, as in a monk’s hood. It even has a tonsure!

These two seem to be either both females or juveniles because the male would be more spectacular.

The next evening, a male Northern Flicker, Colaptes auratus,  flew in to the very top of one of the tallest dead trees.

Notice the bright yellow (auratus) underside of his tail, found only in the Yellow-shafted subspecies of the Eastern US. They have a varied diet of insects and fruit, nuts and berries, but 45% of their diet is ants.

This one was not feeding; he was on a different mission. He alternately called and then drummed on the very end of the branch, typical territorial display for the springtime. Unlike most woodpeckers, they largely feed on the ground, so the drumming is unlikely to be foraging. Here is a short video:

And then the icing on the cake, for me. This beaver pond and all the others on my land were bereft of beavers last summer, and I didn’t see a single one. But as I was walking away, standing right out in the open, I saw a giant muskrat…… no, a beaver, the creator of this magical place! Happy days.

(I am slightly worried that the poor beaver has a porcupine quill stuck in his upper lip? But maybe it’s just part of his mouthful of vegetation.)

* PS: In Florida three weeks ago I saw this pair of wood ducks, high in a tree. They will nest up to 65 feet up. As you can see the closer female is relatively drab:

They breed all along the East coast of the US, but in winter the northerners all move southwards, rather like Canadian retirees.