The Verreaux’s Eagle Owl, aka the Giant Eagle Owl, Bubo lacteus, is an imposing bird, measuring 26″ with a wingspan of up to five feet. It is the largest owl in Africa, and the fourth largest in the world.

We were lucky enough to come upon two fledglings on the lower branches of a large tree in full view. Here is one of them: 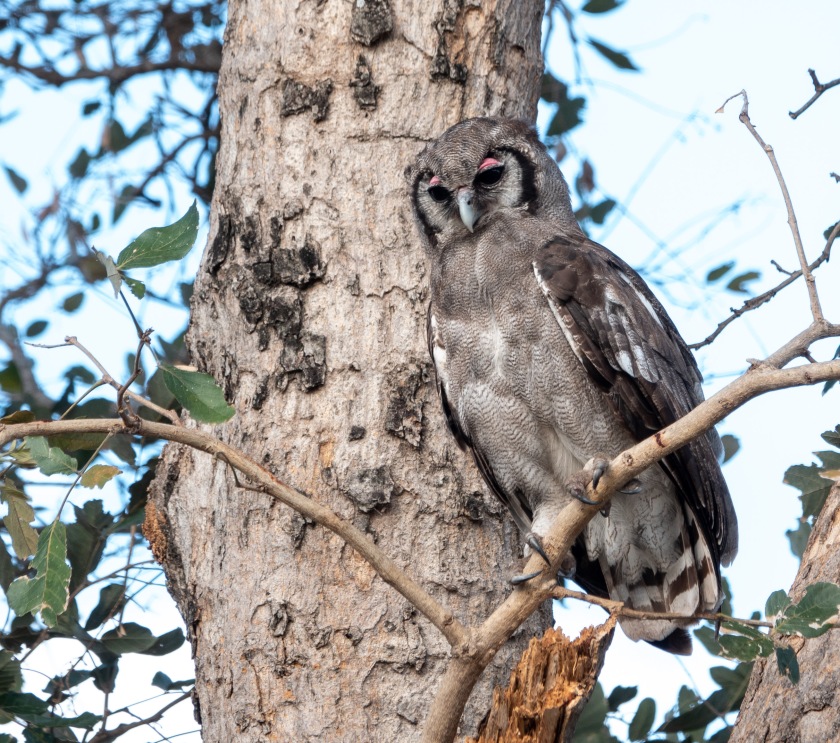 This one was practicing using its beak and its wings:

And you could clearly see the strange pink eyelids*, whose purpose is unknown, but they are brighter in males in the mating season

Initially they had claimed a tree each, but then one flew over to join its sibling, and all hell broke loose. It appears that sibling rivalry is alive and well in the Ruaha:

The slightly smaller one on the right, whose wing feathers are still covered by more down than those of the older one on the left, was the aggressor, clawing at the eyes of its sib:

After a ding-dong set-to, the older one gave up and returned to its original tree:

It is quite common for one sibling to kill the other, a phenomenon known as siblicide or (hence my title) Cainism.  But usually the older larger chick is the aggressor. Here it seems to be the reverse. The aggression can continue at least till all the adult plumage has grown in.

Verreaux’s Eagle Owls leave the nest at about 7 weeks old, and take another 2 –  4 weeks to learn to fly, so these were probably around 10 weeks old. The mother was in a third tree nearby.  They do not start to hunt for themselves till around five months, but as adults they are apex predators, eating a huge variety of mammals, birds and reptiles. One favourite is the hedgehog, and they are the only predator that routinely tackles this prickly delicacy. They swoop in, with their talons going for the spineless face. Watch this one dining like the Romans:

The eagle owl has an extraordinary call, the deepest of any owl species. This is a male, (recorded by Frank Bruneliere, in Namibia, courtesy of Xenocanto):

The call can carry up to 3 miles, and you might easily confuse it with a leopard.

* Rihanna may be channelling her inner eagle owl with these pink eyelids: