Ecuador has about 134 different species of hummingbirds. Compared to 1 in Maine and 0 in  England, this is really quite overwhelming. They are not good at staying still for photos, and they are also not easy to identify, but the variety is astonishing. I have been completely unable to exercise self-control and limit my number of photos, so stop when you get bored.

or tails that Isadora Duncan would envy, like these:

Some have fluffy pompoms round their ankles.

They are also very territorial and engage in frequent spats:

And most of them are iridescently glorious, with what is called “structural color”. The iridescent colors  “are the result of the refraction of incident light caused by the microscopic structure of the feather barbules. The refraction works like a prism, splitting the light into rich, component colors. As the viewing angle changes, the refracted light becomes visible in a glowing, shimmering iridescent display.” (Cornell University All About Birds website). If the light angle is wrong, the feathers just look black. 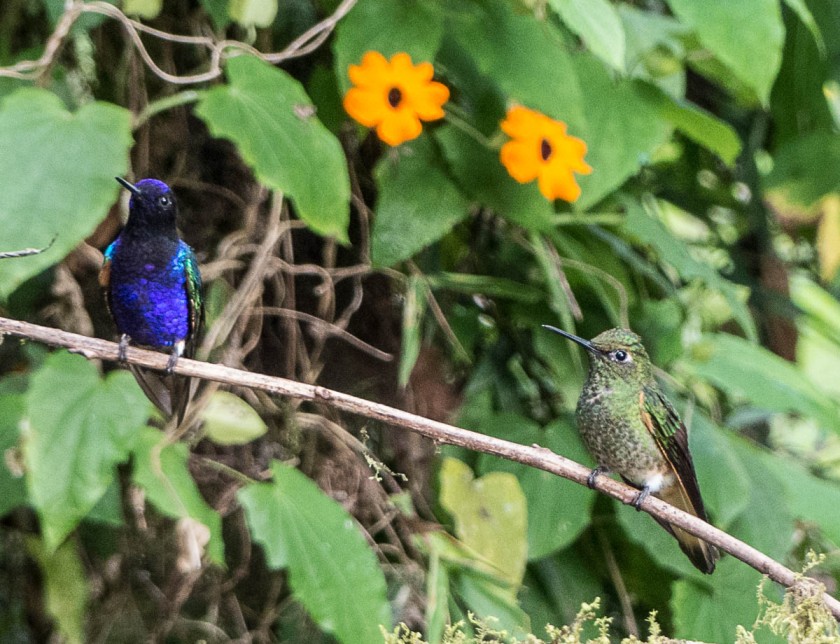 PS: My title today is a line from Emily Dickinson’s poem, The Hummingbird.

…A route of evanescence
With a revolving wheel;
A resonance of emerald,
A rush of cochineal;..

PPS: If you are interested in their behavior, this recent article calls hummingbirds “bees with feathers”, and argues for treating them as an example of convergent evolution: