Quito, the capital of Ecuador, is exactly on the equator (the name of the country rather gives the game away). But near where the bears live, at over 14,000 feet, it is much colder (Mt. Whitney, the highest mountain in the continental US, is 14,500 feet).

The plant life has evolved for this unusual combination of very strong sun, but high altitude. They are often low to the ground, and many are spiky, succulent, almost plasticky cushion-plants, forming great mounds in which the growing medium for the living plant is its ancestors’ decayed foliage underneath: 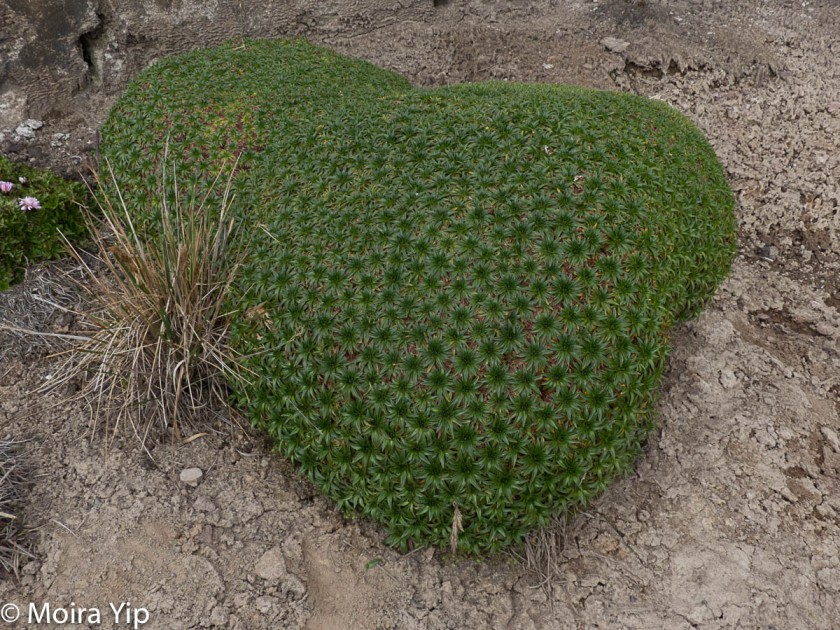 To my eyes most of them were completely new, so when there was a lull in the bear hunt I pointed my camera at the leaf patterns and the flowers instead: 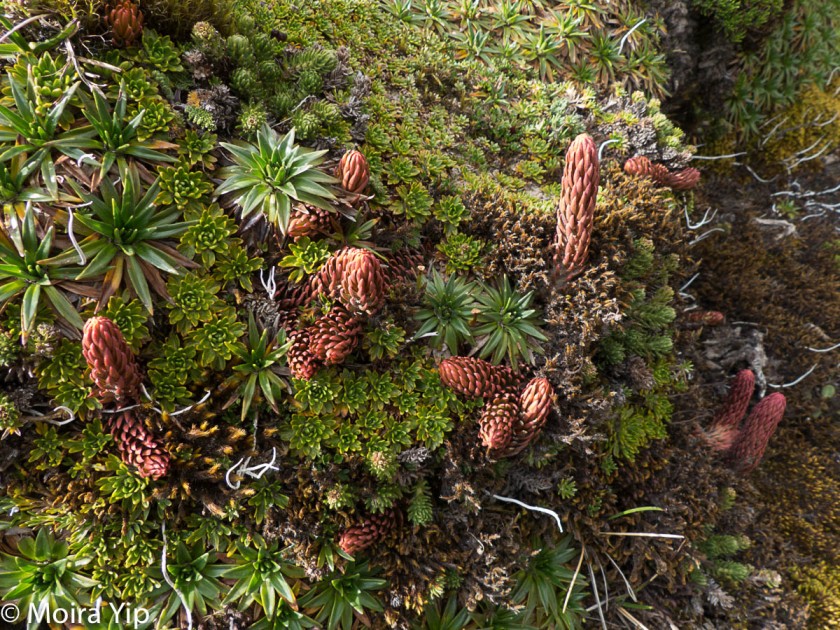 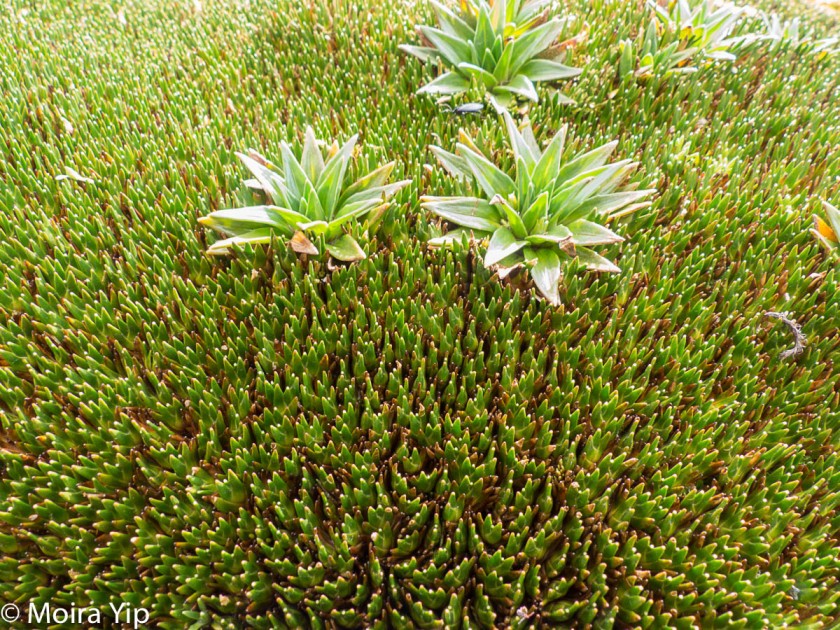 And this tiny gentian:

At slightly lower altitude there was also a rich, still unfamiliar, but rather different flora, but more on that another time.

No, it’s more closely related to a horse…

We were watching a salt lick at Napo Wildife Lodge in the Amazon Basin, waiting for the parrots to descend, and instead we were incredibly lucky to get a front-row viewing of a young male tapir.

Like the parrots, they need the minerals in the clay, especially sodium, to supplement their diet of leaves, shoots and fruit. He stayed for a long time (despite being aware of our presence) the size of a small pony, and apparently not yet full grown.  They have a mournful face, with a long floppy proboscis made of their nose and lips, and a fleshy crest running from the top of the head back to the shoulders.

And a very pink tongue.

The Quichua guides who helped us find bears also help a biologist to collar tapirs (the mountain tapirs are slightly smaller), and Rodrigo proudly showed me this photo:

PS: The flock of parrots never came, because a hawk came down and took one, and spooked the rest. But watch this space for a different salt lick.

I seem to be stuck on children’s book themes, first Paddington and now Roald Dahl…

In the same area as the Spectacled Bears there are these beautiful foxes: 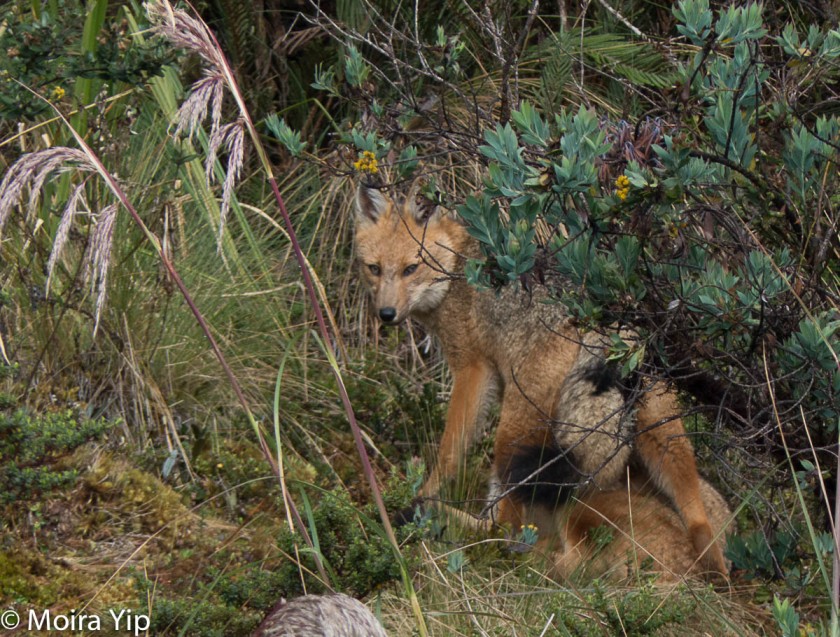 Called the Paramo Fox by my guide, they are the local variant of the Andean Fox, or Culpeo. The Latin name is Lycalopex culpaeus. These two hang around the ranger’s station at the park, and are unusually tame, which is why I got good photos!

Foxes interest me, because although they all look very similar, they are only very distantly  related to each other. For example, in Maine we have the Gray Fox, Latin name Urocyon cinereoargenteus: 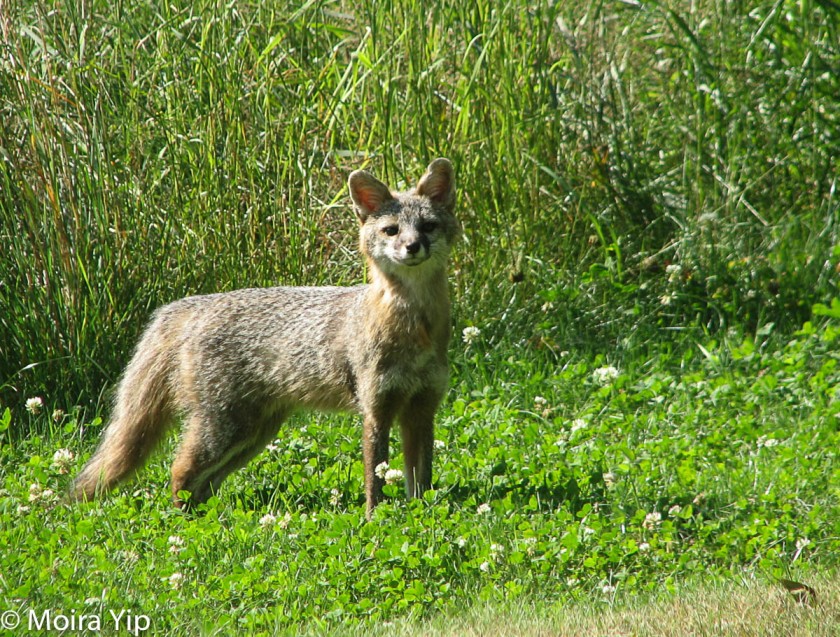 This one raised five kits under my porch one summer. Rather astonishingly, the Gray Fox climbs trees:

Foxes are all canids, and have evolved to fill very similar niches in their local environments, but they belong to different genera, so that the red fox of the UK is Vulpes vulpes, different again from the two above.

I try to keep my posts short, but this one is longer than usual. I have just returned from Ecuador, having seen some beautiful, fascinating natural wonders, so there will be a series of posts as I organize my photos and my thoughts.

The main driving force behind my itinerary was my desire to see a Spectacled Bear, otherwise known as Paddington, who lives in both “darkest Peru” and darkest Ecuador, being no respecter of national borders. Rather than keeping you in suspense, let me tell you that I found one (actually seven):

So here is the story. They live high in the Paramo climate zone of the Andes, in this case at 4,300 meters, or 14,500 feet, in the Papallacta Pass in Cayambe-Coca National Park. There is a road through the middle of the park:

But other than that it is gloriously wild, with a few gravel roads, and the very occasional trail:

The park ranger hadn’t seen any bears that day:

But over the course of three days with the help of my guide Andrea, and local Quichua guide Rodrigo (at left) and his father and brother we found them. (Despite their solemn faces, they were actually a cheerful, smily family, and very good at finding bears!)

Only one was close enough to photograph; the others I saw through binoculars or indeed Andrea’s scope, including the highlight, a mother and two tiny cubs, the mother with perfect spectacle-shaped face markings.

The bears’ favorite food is a type of spiky bromeliad, which they eat just like we eat artichokes, discarding the leaves and going for the soft centre, which also contains their favorite grub.

Getting closer to the bears is very hard because the terrain is composed of huge thigh-high clumps of grass, with no space between for your feet. It is steep, and you gasp for breath every few minutes because of the altitude.

But Andrea spotted this young male bear, who moved out of the open into a clump of trees, but then he emerged on top of one eating the berries, and stayed there, watching us closely, as we trekked through the grasses to get a closer look. 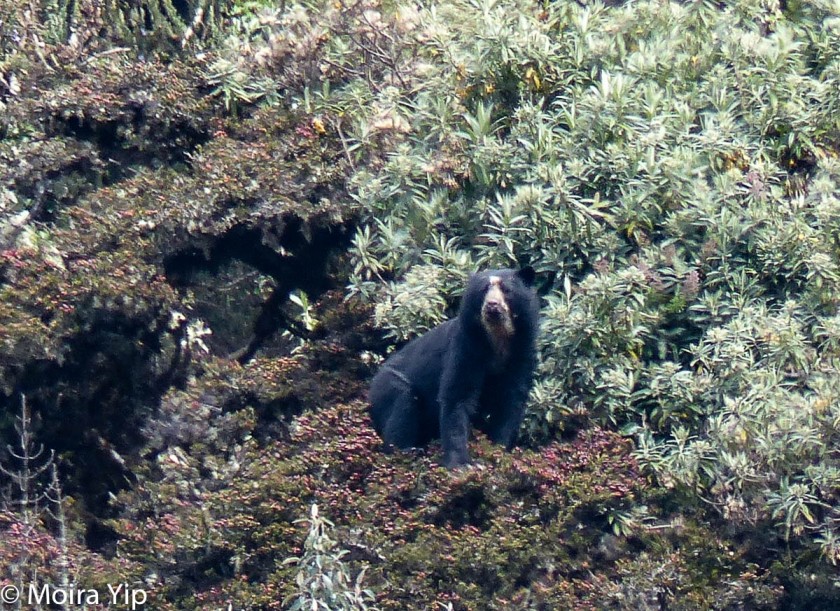 So I succeeded in my mission,  and can tell my grandson that I took Paddington to visit his family in South America. 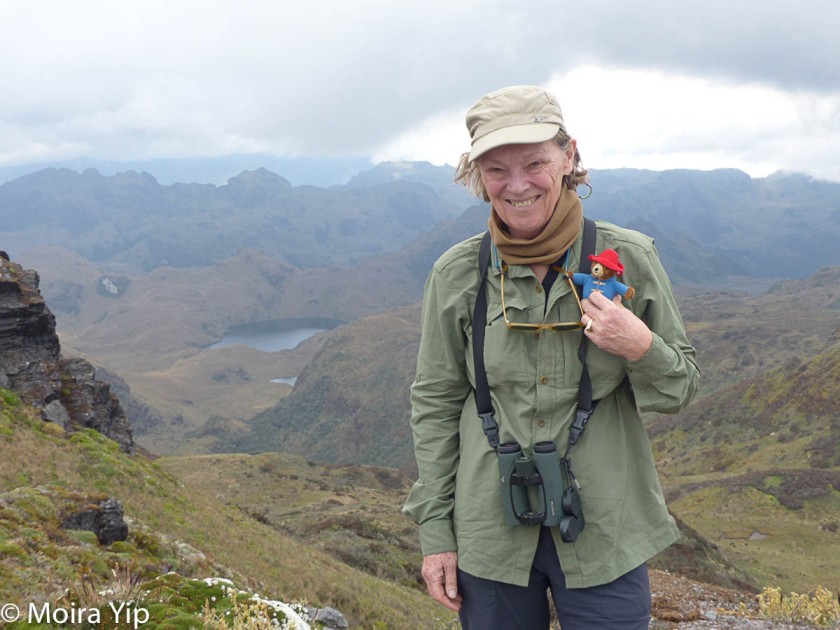 Also hunting for the bears were two young German wildlife film-makers, who had not got a single shot in 8 days before we arrived. I am glad to say they eventually caught up with the mother and cubs and apparently got some footage, but meanwhile they left their hat on their tripod, and so Paddington indeed seems to have come back home… (thanks to Andrea for noticing this, and for the photo!).