The Bald Eagle, Haliaeetus leucocephalus, is America’s iconic bird. They are not bald, but white-headed.

In the 1970’s there were only 39 nesting pairs left in Maine, but they are now recovering, and by 2013 there were 634 nesting pairs. A pair breed every year on our lake. I took the photo of one of the adults from a small boat (thanks, Kevin). This year they raised two chicks (now fledged).

Their nest is a messy collection of branches and twigs, high off the ground: 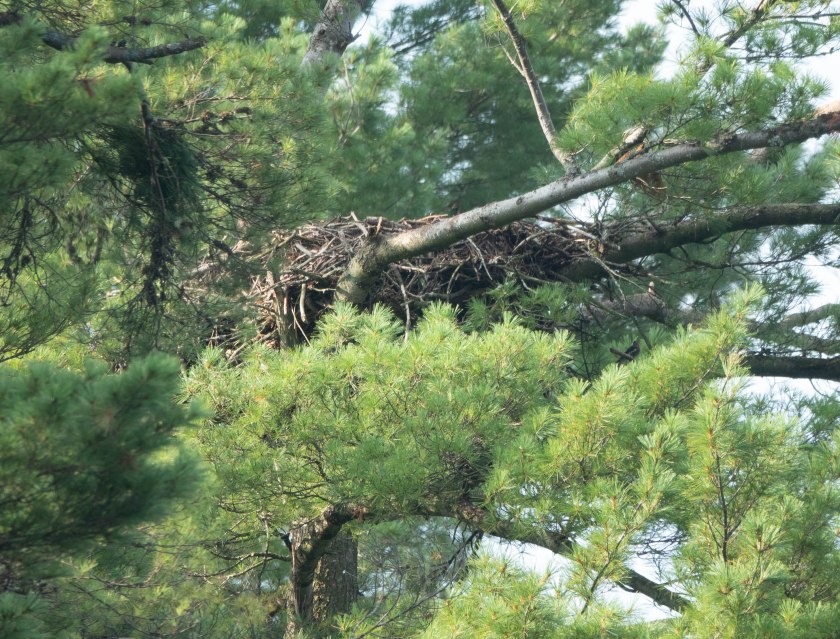 They have powerful feet, and prey mainly on fish, which is why they are more common on the coast.

They also snatch fish from ospreys. Round us, ospreys are rare, but one flew over yesterday:

An adult female bald eagle has a wingspan of up to 7 1/2 feet, or 2.3 meters, and can weigh up to 14 lbs, or 6.3 Kg.  Their vision is astonishing; one comparison suggests that they can see unaided as well as we see with powerful binoculars. The oldest verified eagle in Maine was 32 years and 11 months old!

Seeing their numbers recover is inspiring, but I have mixed emotions: the heron colony on my land has been abandoned, most probably because of the threat to the nests, eggs and young from the circling eagles.

PS: Many countries have chosen eagles as their national symbol, including Albania, Austria, Mexico, Montenegro, Philippines, Poland, Romania and the USA. I think the Mexican Golden Eagle is my personal favorite, partly because of the charming prickly pear cactus it is perching on.

PPS My friend Mary Pearce has explained the story behind the Mexican seal. Apparently the Aztecs, guided by the prophecies of Huitzilopochtli (the god of the sun and war), ended their migration from farther north by building Tenochtitlan (now Mexico City), on an island in a lake where an eagle held a snake perched on a flowering nopal (prickly pear) cactus.