Solomon’s Seal is a very beautiful plant. One species grows wild around here, but the photos are of the ones in my garden, which have been there since before we owned the house, which means at least 40 years, perhaps much longer. 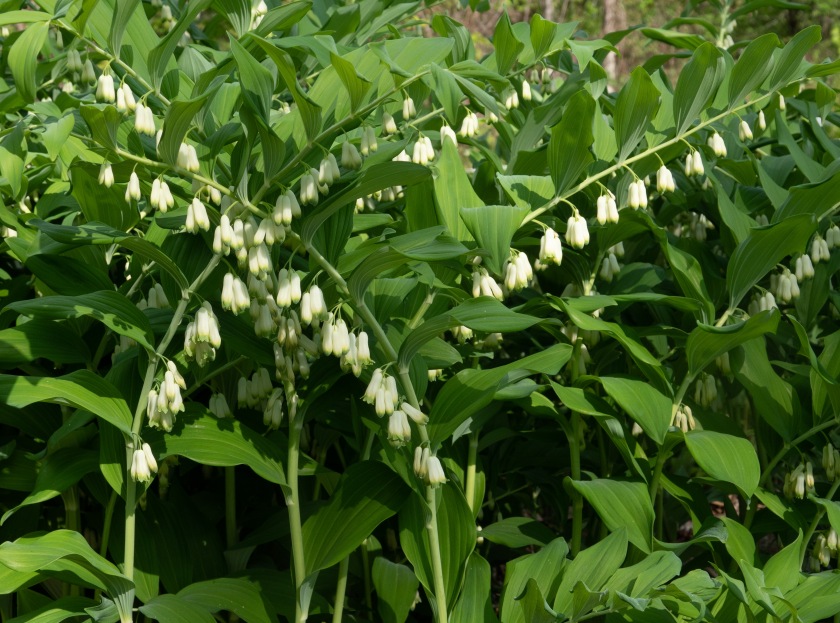 It was in full flower two weeks ago, and I noticed that it was heavily populated with bumblebees.

After doing a bit of light reading, I realized that these are queen bumblebees, which rather astonishingly winter over here under the ground. When they emerge in the spring  they are peckish, so a sizable plant like this is a great source of nectar and pollen.

But the flowers, each one a tiny bell, are closed, and to the bee has to force them open. Not all bees have the strength for this.

What is more, the pollen is deep in the bell, so once the bee has got its head inside the flower, see below, it vibrates its wings at just the right frequency to dislodge the pollen, and down it showers.

They stash some in their pollen baskets,

and some sticks to their fuzzy coat and gets carried along to fertilise the next flower they land on.

The queen then builds a nest in the ground, creates tiny waxy cups, fills each one with nectar and pollen, and lays her egg on top. Soon the next generation of worker bees will emerge. Quite a trick.

PS This plant is Polygonatum multiflorum , or  Great Solomon’s Seal.  It grows wild in Europe and Asia, and the Victorians cultivated it and brought it to the USA.

PPS: Buzz pollination is explained rather well here: “Approximately 8 % of flowering plants (∼20,000 species) have poricidal anthers, which release pollen only through small pores .. These anthers release pollen when they are vibrated by bees performing buzz pollination, or sonication … —a behavior in which bees grasp the anthers with their mandibles (usually) and vibrate their bodies by activating their flight muscles while decoupling the wings…. This transfers the vibration to the flowers, and pollen pours out of the anthers onto the bees’ bodies, where it can be groomed and brought to the nest to provision the larvae.” (Excerpted from Switzer and Combes 2016. )

4 thoughts on “Solomon and the Queen”